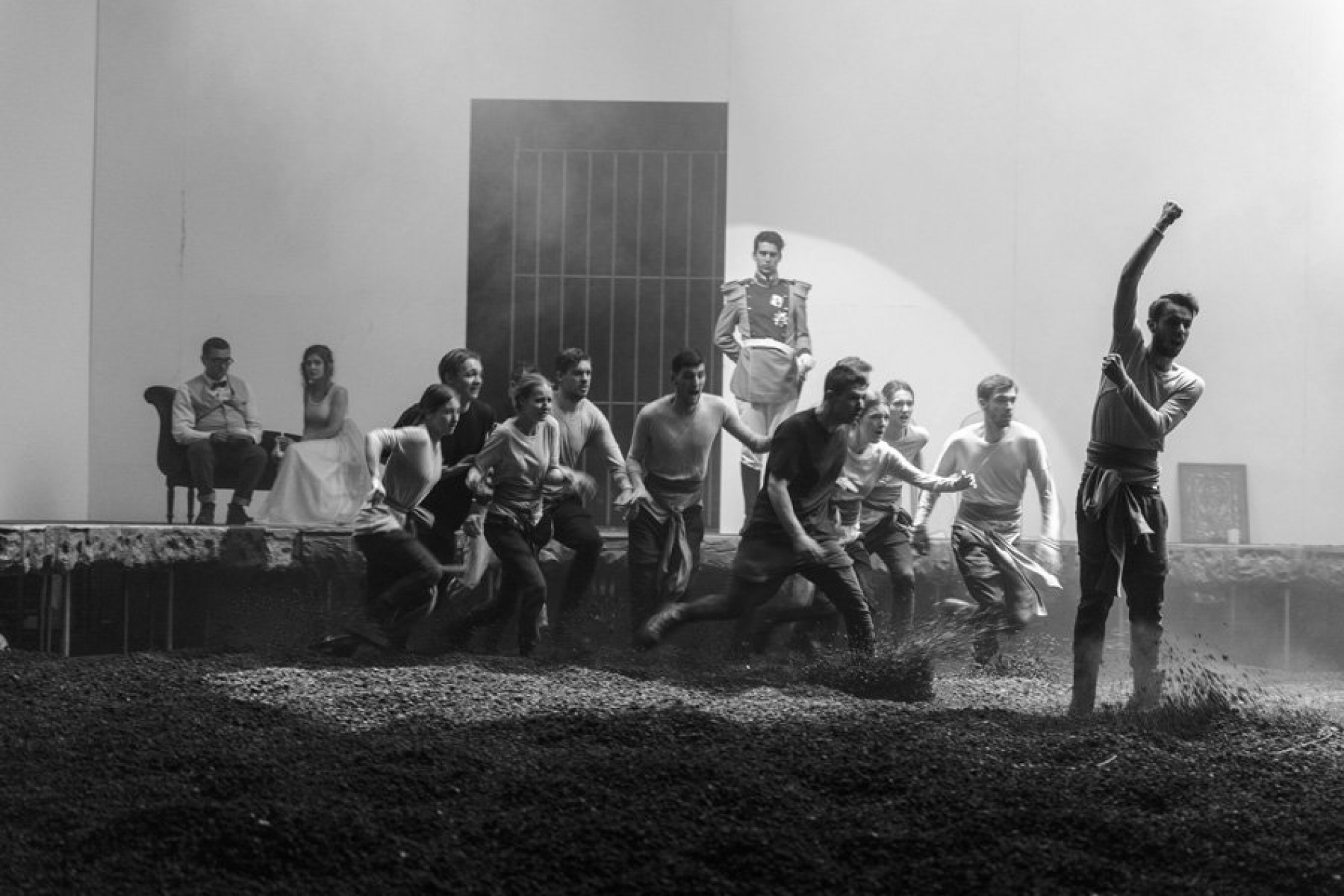 The monumental piece by the Russian classic author is often brought on stage and screen. The novels such as, in particular, The Brothers Karamazov, Crime and Punishment and Bessy are among the most frequently staged titles that continue to fascinate both theatre makers and goers. We have, however, decided to stage the novel Tame that bears the original psychological potential and powerful theme of the existential status or rather of the security of women, and the conflicting variations of all aspects of a relationship between partners. 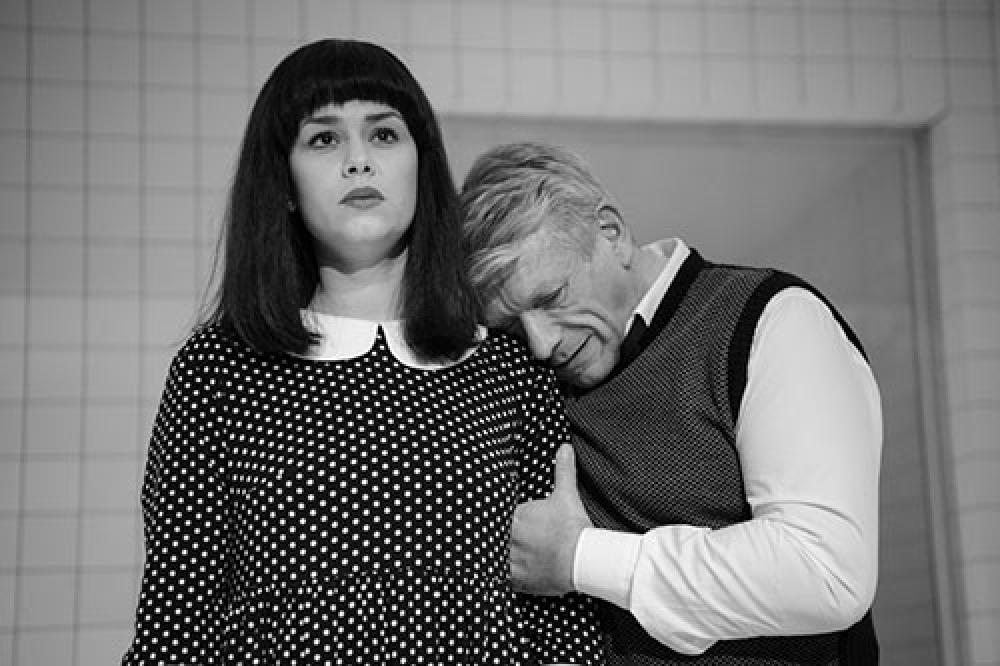 Dostoyevsky wrote his masterpiece prose in the late 1870s. He was inspired by press report about a suicide of a desperate young woman who jumped from the window holding an icon. He was inspired by the “modest subtle suicide”. He imaginatively completed her motives and background. A story of a former officer and pond shop owner suffering from inferiority complex who psychologically tormented his much younger wife, rises many fundamental ethical and relational questions.

On the one hand, we have the intricate manipulation by a more powerful husband. On the other hand, we face desperate disdain of the helpless wife that reaches tragic climax which bears lasting and warning context. Tame as we grasped it at the SND, evolves as retrospective narrative by the widower who looks for the motives of the desperate deed and, at the same time, is also trying to understand the extent of his own guilt. The vitality of the master has been tested by the famed films by Stanislav Barab83 and Robert Bresson. The Slovak National Theatre presents the chamber piece Tame or the first time directed by E. Kudláč who has extensive experience and prven track record working with Dostoyevsky’s opus.

A well-off seventy-year-old falls in love with a twenty-year-old woman. At a time when he no longer expected anything from life – metaphorically, before sunset – he recovers his zest. Life, which had been slowly nearing its end, suddenly regains its charm and beauty. 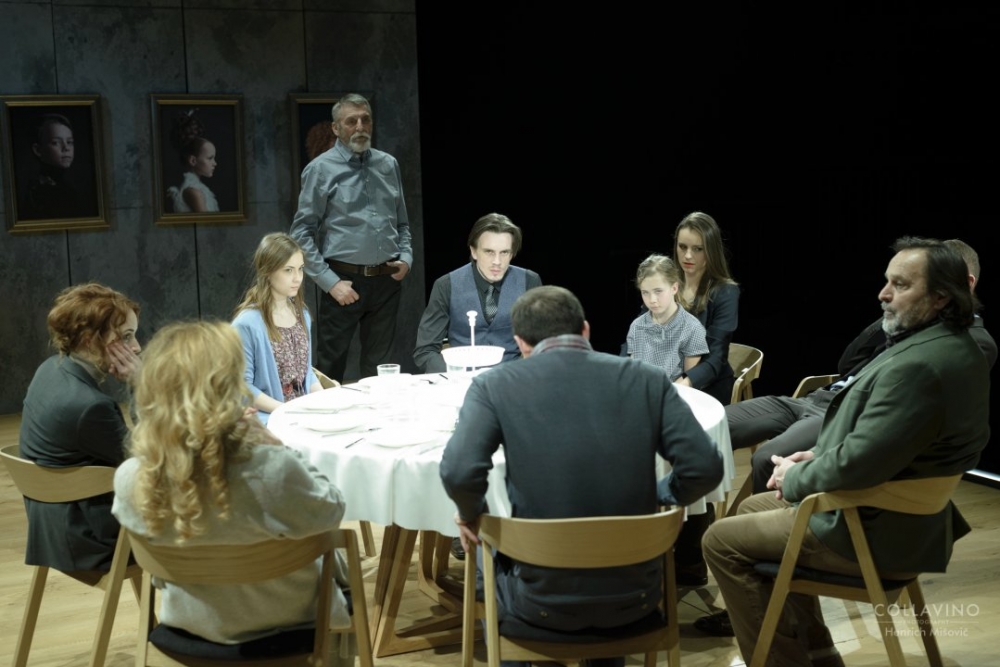 Except that his family perceives a threat in the relationship. The children, who are used to being the centre of their father’s attention since the death of their mother, cannot deal with the fact that their place has been taken by a strange, unfamiliar figure: that their father is no longer theirs, that he has not remained faithful to the remembrance of their mother. They take their father’s new partner for a gold digger who intends to deprive them of their inheritance. They decide to ‘protect’ their father from her and from himself, and so unleash a storm of events that ends in tragedy. A powerful family drama by a Nobel Prize-winning author.

The Clausens "family" portraits which are part of the set design were produced by a Dutch fine art photographer Gemmy Woud-Binnendijk.

by Wolfgang Amadeus Mozart, conducted by Ondrej Olos and directed by Jozef Bednárik

Don Giovanni is not only a story about a punished sinner, as it is alsonot a simple music comedy, too. It is a unique piece of drama work, in which seemingly typical funny situations, so uncomplicated and slight in other operas, here they are rough, and they cause an overall tension. Giovanni is punished at the end, although the question who was it that sentenced and punished him has no answer. 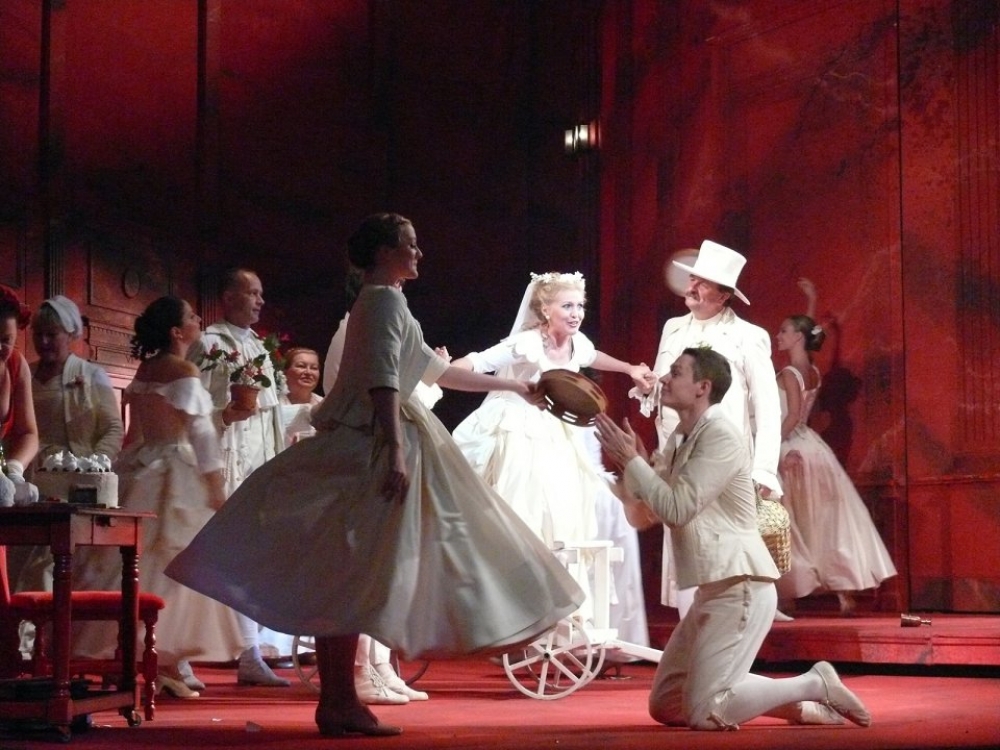 Was it the God, or as Jozef Bednárik, the director of the production suggests, was it Giovanni’s empty and dry heart?

A cabaret for three actors is set in the theatre season 2035/36, just a few years after all theatres had been closed. They might reopen, if spectators graduate from the academy of spectator art. Guided by two experienced professors and a lecturer, spectators pass through a range of lectures, illustrations, experiments. 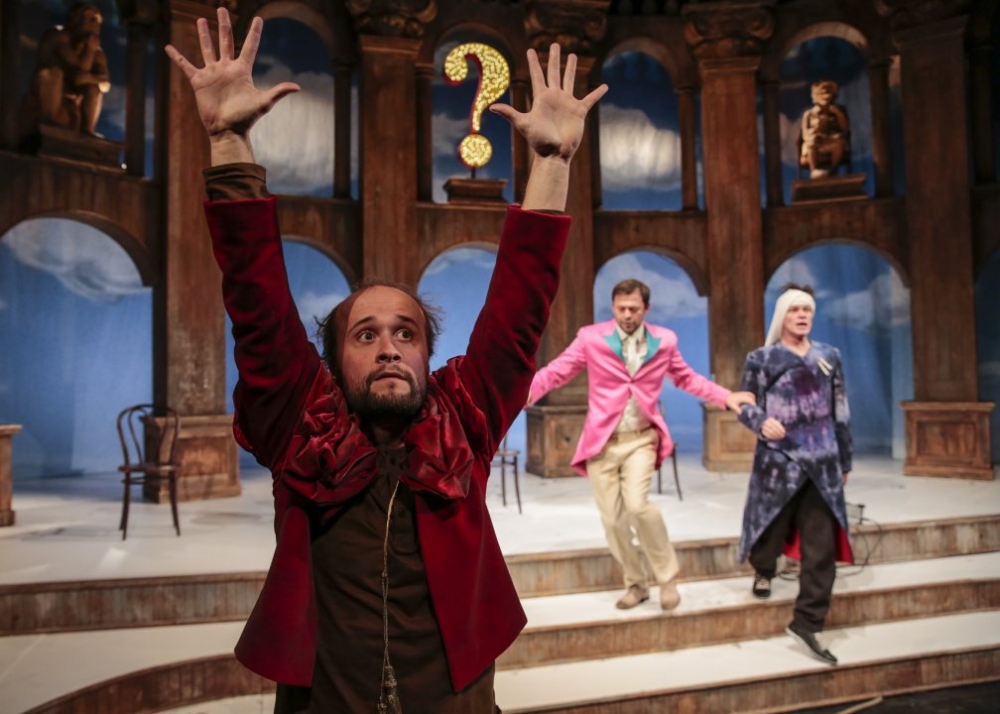 The curriculum is to turn inexperienced individuals into professional theatre spectators. It turns out that it is not at all easy to be a genuine spectator. The status requires effort, courage and an ability to acquire a number of skills, as is indeed expected of proper university studies. A question remains open about the degree of success of such experiment whether it is at all possible to raise the right theatre spectator and at what cost. Ultimately, can such project prove successful in the context of Slovakia?

The contemporary Hungarian playwright István Tasnádi has brewed quite an explosive cocktail that shall affect every spectator. Without exception. 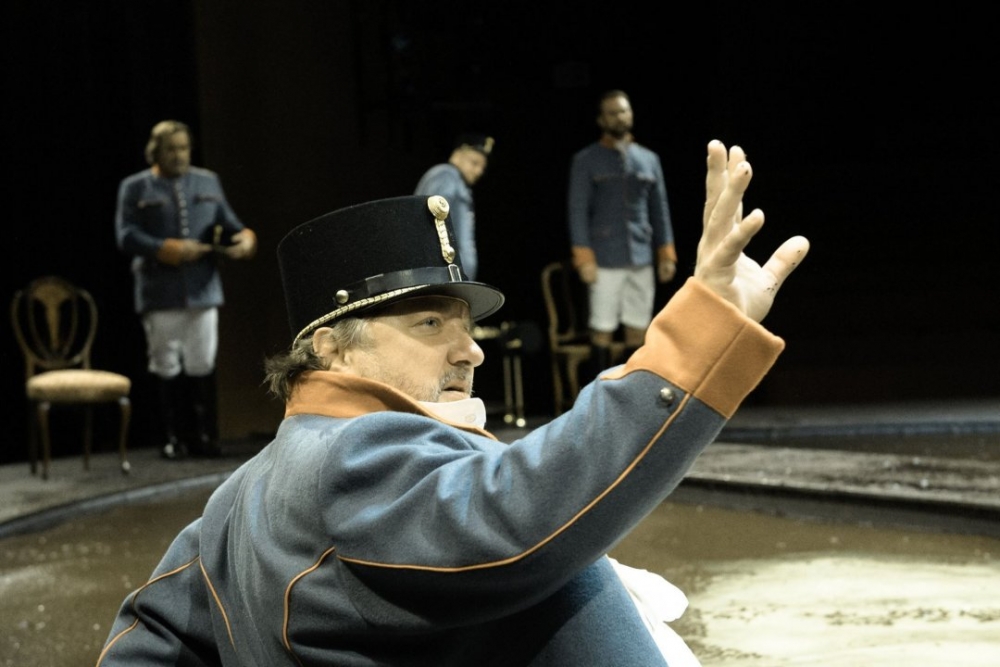 Some think with nostalgia of the golden times of the fallen Monarchy, the waltzes, Radetzky marches and the grace of the olden world. Others feel that they at last stepped out into the fresh air from the stale room that wasn’t aired for years. Has the era of chivalrous noblesse and learning ended? Has the madness of the modernised over-technical world dawned? Or has the lunacy grown like mould from the stale old world? Were those times golden indeed? If so, why have they rusted in the end?

Project 1918 uses a sample of fates of soldiers from the peripheral Austro-Hungarian battalion of the final years of the multinational Monarchy with all its tinsel, morality and pseudo-morals, glory and shadows, errors and decay. The fate of people living their joys and sorrows set against the backdrop of history that has changed for the first time in thousand years.

Tolstoy (1828 – 1910), a genius writer and interesting thinker – philosopher, if you will – is an indubitable authority of worldwide importance whose works enjoy permanent interest. The epic novel War and Peace (1869) is perhaps chief among these. 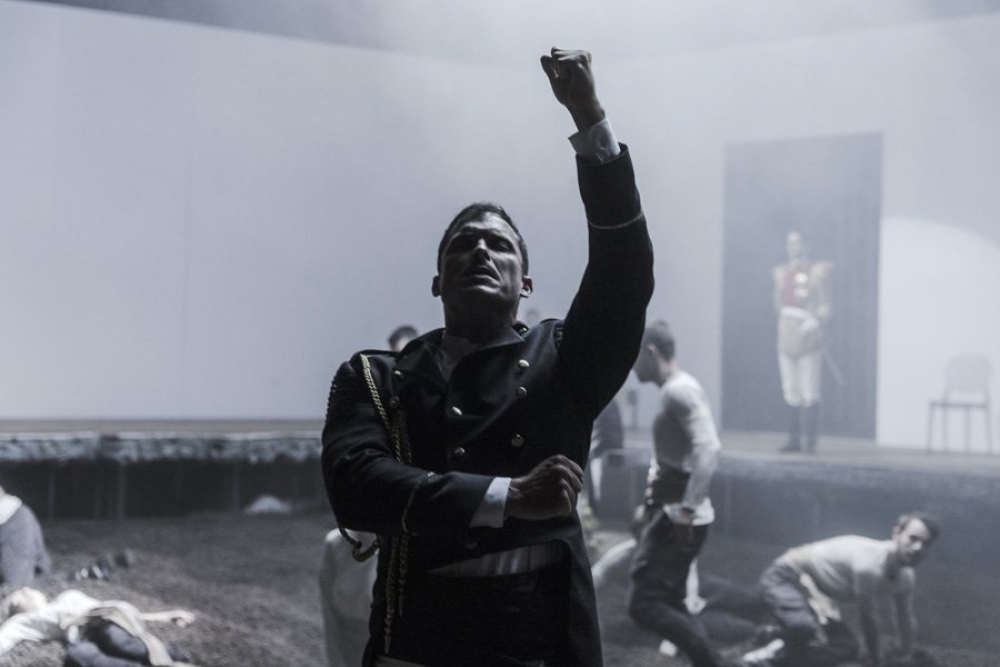 In a certain sense, War and Peace is the Universe that we breathe – and that we sometimes cannot breathe in. For what else is human history than an endless cycle of war and peace, and what else does humanity realise in the aftermath of terrifying battles and wars, which had been looked forward to as the solutions to all our problems? For what else is our private life, if not a quest for happiness and love, studded by so many romantic and dramatic episodes? And what else is our lot, if not to understand our mission in the world while bearing the knowledge that we are tied so closely with Great History, which often, without mercy, steers and even defines our paths?