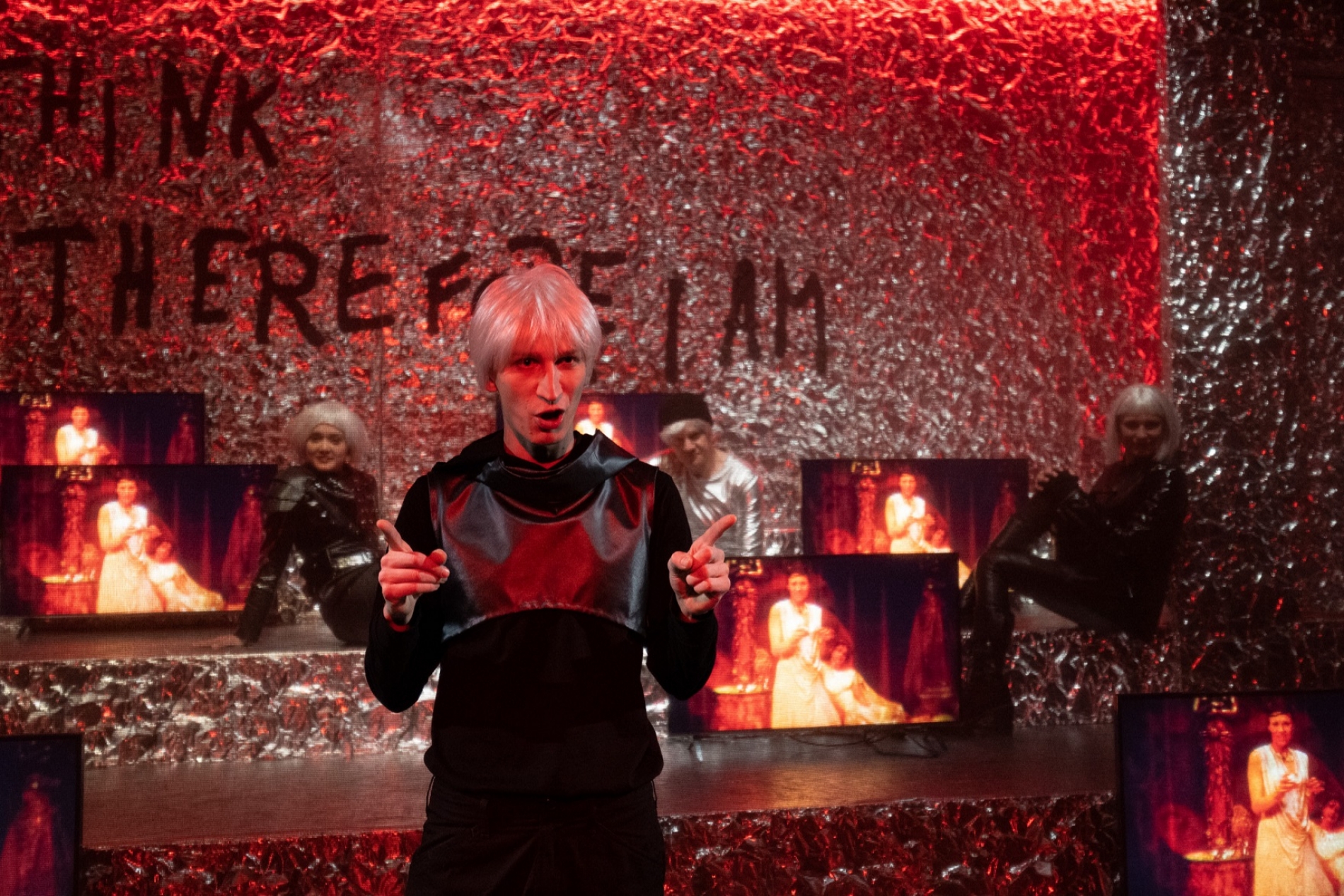 Was zündet, was brennt / What ignites, what burns

In the subsoil of Europe, a branched circulatory system of crude oil is relaxing. Pipelines run through the continent like lifelines and fuel our hunger for energy. Despite all efforts, global oil production has increased continuously over the past fifty years. Nothing, it seems, can stop the catastrophic cycle.

"what ignites, what burns" is about two young women who try anyway. The Kleist Prize winner Magdalena Schrefel has taken on the Austrian part and designed a theatrical road movie along the Adria-Vienna pipeline. It shows the journey of its two heroines across Austria and the endless expanses of the Internet and describes their encounters with climate activists, various eccentric figures of the fossil age and their radicalization: How can narrative means blow up a pipeline?

One winter day, an oil well bursts, in the triangle between the houses, the village cemetery and the ghost cinema. The house, the cemetery, the cinema, come as witnesses of a time that is older than the one the contemporary family lives in. Thus times join the wings, the past echoes the present, places echo people to say that the need for survival controls and challenges the spiritual needs within people of same kin, who are also the miniature of a polarized society.

See more and watch the play

In a small, remote village, the inhabitants are bored. All it would take is one project, one big splash, to restore the village to its former glory of its rich industrial past. But nothing happens... until the weakened old mayor discovers a call for projects that could change everything: the construction of a pipeline highway. It is the promise of new growth. But also the promise of new conflicts... because the resistance is getting organised!

A scenic and choral reading will take place in Liège on 12 November 2022 during the "Forum Sans Transitition!".

According to the prediction of the chief economist of the International Energy Agency, who says that without a sufficient supply of oil, "the wheels will come off the economy".

In the Grand Duchy, the fiduciary management of the fortunes of the Big Oil Companies, hidden in offshore accounts, has a long tradition, from the slush funds of Elf Aquitaine in the 1980s to the tax rulings of today, revealed by the Luxembourg Leaks affair in 2014. Among the hundreds of advantageous tax agreements concluded by audit firms with the Luxembourg tax authorities are several giants of the oil industry such as the Russian SA Gazprom, the sulphurous Koch Industries, the second largest American multinational and the China Petrochemical Corporation, the second largest employer in the world.

Léa et La Théorie Des Systemes Complexes / Lea's Complex Systems Theory, in the continuity of the author's political, documented and narrative plays, such as AppHuman and Terres arides, attempts to trace the course of complex economic mechanisms and to show not only how the Luxembourg economy has been able to make the country prosper thanks to deals with the Big Oil Companies, but also how everything is always intertwined in the opaque world of big money.

The play will premiere at Les Théâtres de la Ville de Luxembourg in the season 2023/2024.

The fuel industry is fueled by corruption, corruption fuels the fuel company. Corruption fuels us all and we fuel it back. Even if we don't think we do, or refuse to accept that we do. Wolf/Sheep is a play about this vicious cycle: a massive iceberg, not its tip ... we all know who those people up there are, but its base is Us. You. Me. And how we all, by doing nothing or thinking there is nothing to do, have allowed these things to happen. Things of all sorts: the trivial, the inconsequential, but the horrific too.

Malta loves a nationwide blackout. Despite very recent state-of-the-art new fuel storage systems. But lack of actual light every now and then is not the only thing keeping us in the dark. Allegorical, satirical, political ... the play evaluates, observes and pushes the limits of a country (perhaps a world?) that can be as surreal as it is confused, noisy, passive, passionate and chaotic. Ultimately, we are all anesthetized, by the wolf, maybe? But the real question is what kind of fuel is our new opium and who are the real wolves and the real sheep?