A Way of Reading 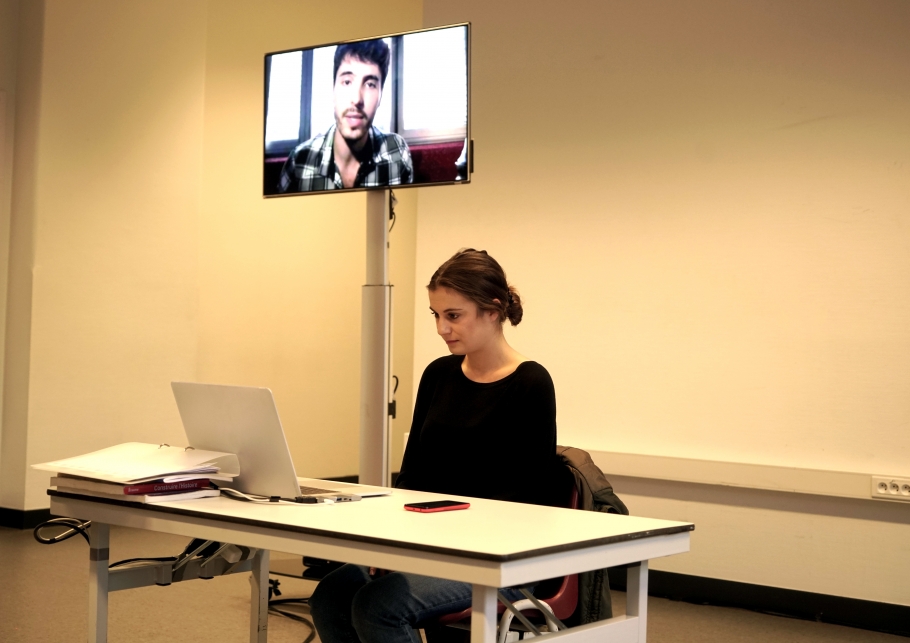 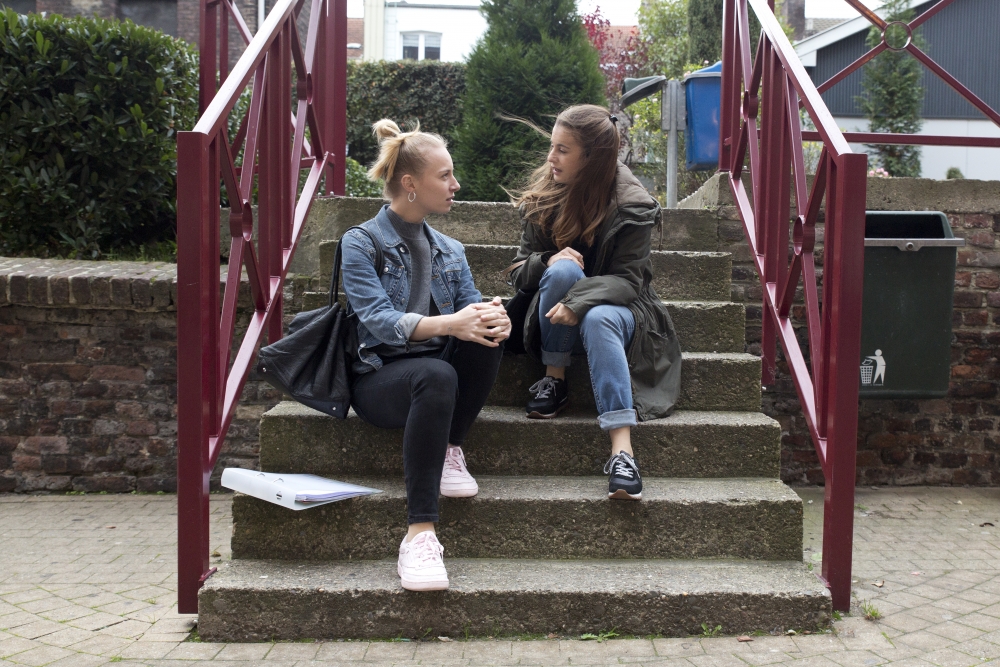 “Definitely do not look for God in the sky, at church, at the synagogue or at the mosque. He is online.” – Alain Bertho, Les enfants du chaos, an essay on the time of martyrs, La Découverte, Paris, 2016

Putting on Daniel Van Klaveren’s Nadia raises many questions. First of all, there is the play: the piece of writing that introduces two adolescents united by their admiration for one another. They recognise and respect each other’s differences. They are friends – they love each other. School, family, boyfriends, hobbies and the internet all play a role in the edification of their friendship that we wish would be go on harmoniously forever. Because Nadia and Anna are young, beautiful, intelligent, spontaneous, funny girls; because people like them and they love life. But when Nadia and Anna have to prepare a report on the Second World War for their history class, their interests start to diverge.

Nadia wonders about the interpretations of the war’s motivations and Anna is busy with her blog. Nadia and Anna’s relationship is truncated by history.

Nadia is seeking explanations for her growing concerns. And, on top of that, she discovers that part of her family ‘over there’ – whose existence she had previously been unaware of – has just died in a bombing. At the same time, Anna grows more and more preoccupied with her image on her blog, which she adorns with nutrition concepts. The two young girls are both searching for their identity within an obsolete collectivity. Nadia isolates herself more and more, and secretly plans her imminent departure. Anna finishes creating her blog about well-being. And both of the friends’ emancipation takes a turn that deserves our full attention.

Nadia manages to avoid the scrutiny of her friends, parents, professors and Anna as she plans her new life in a new world. She dreams of truth, authenticity, of true love. Brahim is charming: he understands her doubts and persuades her with just a few words. He is essentially everything she is looking for. He is Nadia’s saviour who allows her to access faith. Suddenly, god exists. And, with him, true love. No more misunderstandings and lies. Nadia discovers paradise on earth in Brahim’s smile. There is no more use in having friends, parents, professors. Nadia has outgrown the framework upon which her life was once built. She now feels free and independent. Nadia is no longer afraid. Nadia is gone. Anna has stayed close to her parental bosom, suspended in eccentric narcissism. She is a slave to the virtual world and the number of likes she gets. Although she feels full of creativity, she is wholly dependent on the way that other people see her.

When these two young girls leave the nest, there are catastrophic and troublesome consequences. It is not a matter of terrorism, a warrior’s fight or armed conflict... in her relationship with Brahim. Quite the opposite, everything is peaceful and quiet. At the end of the tale, when Nadia tries to contact him, women appear on screen: a new community of adults, a harmonious and welcoming world. When Nadia sees the women, ‘the sisters’, she is not as worried as the rest of us. And although she is a bit perturbed by the absence of her saviour and the presence of the women, Nadia artfully conceals that from her friend. Lost in a complex system that escapes her, reckless and bereft of words when faced with Nadia’s questions, Anna does her best to write Nadia one last message. Because Nadia ran away from her. Then again, she ran away from everyone.

Nadia and Anna are two young girls who both dare to create their own identity through intimate relationships. On their search for social, intellectual and sexual emancipation, they both unknowingly and naïvely reach out using their powers of seduction. For Nadia, Brahim represents the cliché of masculine maturity, while Anna posts pictures of herself that she fears are pornographic on her blog for a completely fantasised readership (an imaginary mass). 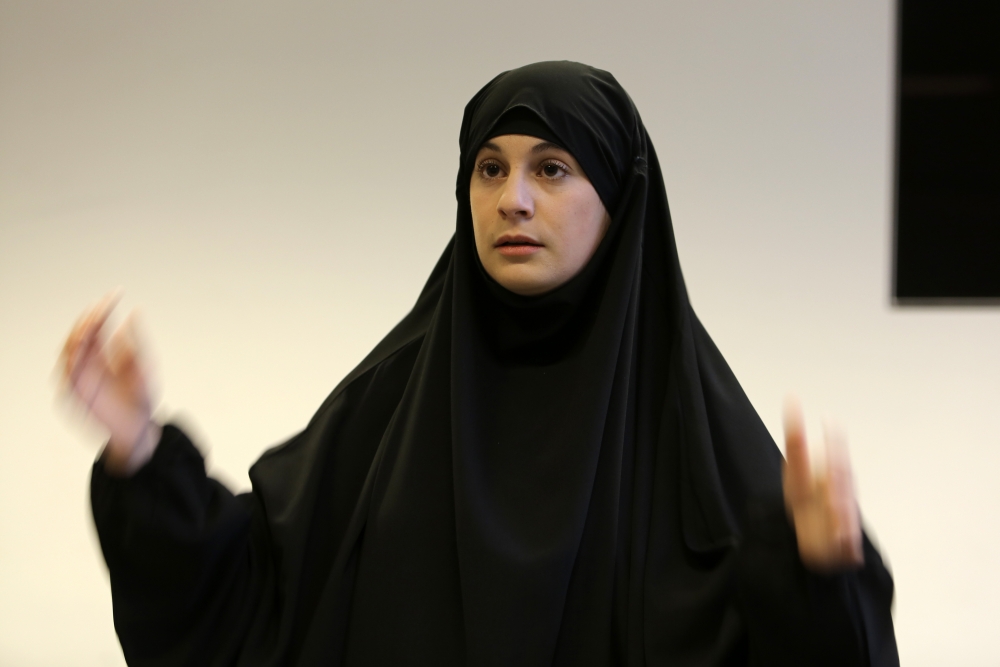 A way of seeing
I am worried about the future of life on this planet in view of today’s conflicts. And as long as we, the ageing adults of society, do not take on the responsibilities that fall to us regarding cultural education, I will only keep on worrying for young people, especially young girls. And that does not even take into account our political and civic responsibilities that, due to intellectual laziness, we are taking on less and less.

Nadia is a play; it is written to be played. But play how? To play life, what is real.

With Nadia, we ask ourselves questions about the differences within our communities (whether cultural, social, economic, religious, political or differences). What are we doing collectively to think about the return of young ‘penitents’ people in our school classes, our families, our society? What future can we hope to offer those who left, those who don’t dare say they are lost, those who might come back, or those we call wrong? What kind of society do they dream of? What can the youth grab hold of to dream of the future, think of a future? What are the stakes? What do words such as ideology, resistance, conscience and emancipation mean? Who governs whom? What, exactly, are we being informed about? Are there any truly reliable sources of information? …

A system of terror and violence is unacceptable. I cannot agree with Nadia’s departure because I imagine its fatal outcome. However, I understand where her desire to revolt comes from. I do not support the path Anna has chosen, either, even if the consequences of her choice are apparently less dramatic. As both girls search for their own identity, they experience a complex friction between their relationship to themselves and their relationship to the world. This is something we must all grapple with.

A way of doing things
The actresses were chosen after three days of auditions. Three very important days, as was revealed when I saw the very first performance of Nadia in Amsterdam. There, I discovered the importance and the strength of the relationship between Nadia and Anna because it is born from a true, deep love that is fundamental to true friendship. Also, I find the environment these two adolescents grow up and mature in very moving. School and the home can quickly become hostile and counterproductive places that young people are confronted with every day. Here, despite their naivety, the young girls are quite creative while seeking paths to autonomy. They are yearning to think freely, even though the world that awaits them has already been formed. Actually, there isn’t really anything new. The internet makes it possible!

The girls take two very different if not dubious paths to emancipation: one choosing to run away to the Caliphate, the other to become a successful blogger. I see a descent into hell.

In Nadia, events unfold in rapid succession, without leaving the viewer much time to think. Everything goes very fast. The young girls are looking forward to being done with their doubts, their worries. They want answers without having to wait anymore. It is likely a case of life or death, or at least it is an emergency. I believe that the play’s singularity lies in that: that is what is truly at stake.

With Nadia, we can start conversations about the emotions that drive us. We can relate to the characters because everything seems so tragically real.

I hope that the show has an impact on the students, even if they are not the play’s only audience. Theatre is an excellent artistic tool for expressing events that challenge our reactions, our prejudices, our values, our opinions. Let us honour it by engaging in the conversations and discussions it deserves. 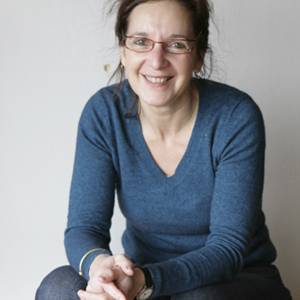 Isabelle Gyselinx is a Belgian theatre director. In 1997, she founded the company Paf le chien for which she directed numerous plays. With Peter Weiss’ L’Instruction (2005) she achieved international acclaim at Young Vic Theatre in London, as well as in Rwanda and Japan. She teaches at the École Supérieure des Acteurs of the Conservatory in Liège, and often offers workshops abroad, in Russia, Rwanda and the Democratic Republic of Congo amongst others.