Beneath the Two Suns 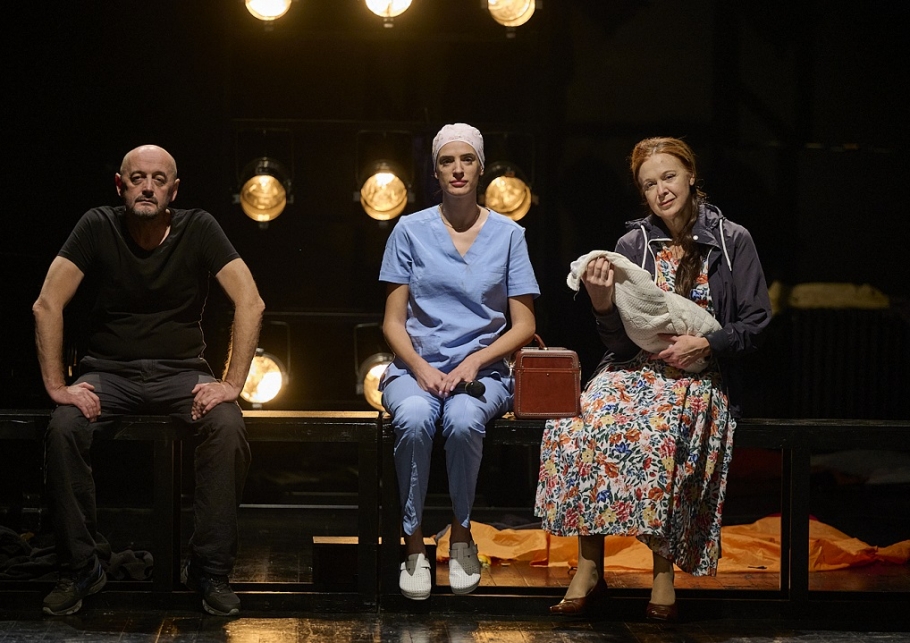 The new season in the Royal Theatre “Zetski dom” started on Sunday (October 2, 2022), with the premiere of the play “Beneath the two suns”, based on the novel by Ognjen Spahić, dramatization by Stela Mišković and directed by Boris Liješević.

The novel “Beneath the two suns” was written by Montenegrin writer Ognjen Spahić at the request of the Royal Theatre, and was published in 2020.

The Artistic Director of "Zetski dom" Lidija Dedović said that "the play will touch the soul of the contemporary audience of the 21st century in a special way.

"We gathered around this precious novel as a treasure that illuminates in a certain way topics that were hidden, and also topics that really concern us" Dedović said, adding that this play analyzes various wounds from the past, but at the same time it is about love, strength, sacrifice and destruction."

Announcing Sunday's premiere, director Boris Liješević said that the novel is about a married couple who have lived on a lighthouse for 27 years, since the events that drastically affected their lives and their destinies.

"We have people who have been changed by loneliness and isolation, their characters and relationships have changed. They live in silence, they are involved in the past, and have stopped at one moment in life. In the second part of the play, they have uninvited guests, two young people who want to camp near the lighthouse. After 27 years, they meet some people again, life wakes up and laughter and screams start to ring out. However, the question is whether, after so many years of silence, abandonment and loneliness, a new life is welcome," emphasizes the director.

The Author of the dramatization, Stela Mišković, says:

"Almost every sentence from Spahić's novel is so meaningful that the theme and essence of the play can be wrapped around each one.

"We are talking about people whose hearts are bleeding, who spent their hearts on a state that no longer exists, on duties and an ideology that is meaningless and ridiculed by today's younger generations. They spent their hearts on grief for an unborn child, on suffering, on hatred, on compromises," adds Mišković.

The actor Srđan Grahovac expressed his special satisfaction for working again with the director Liješević, as well as the members of the acting ensemble "Zetski dom".

"There is one thing in this novel that intrigued me a lot, and that is when Bato Lončar, captain of the 1st class, and I act him, says: "And we were happy". We have certainly all experienced this in some examples in our lives, that there is a certain period of time in which everything works, and then, in some strange course, everything turns upside down and starts a detour from which there is no return. Why and how - this novel explains that very well", says Grahovac.

According to actress Varja Đukić, the play "Beneath the both suns" will mark the current moment in the theatre and society.

"The play, like the novel, deals with the story of two generations - one to which my colleague Srđan Grahovac and I belong, and the other generation to which younger colleagues belong, who are faced with different but, in fact, related dramas," says actress Varja Đukić.

Actress Marija Maša Labudović is also satisfied with the process.

"The play abounds in monologue forms that require great responsibility, dedication, concentration, attention, in which your only partner is the audience, and those monologue forms were a big challenge for me,” says actress Labudović.

Speaking about the role of Mitar, actor Vule Markovć emphasizes when a person lives in a lie long enough, he stops perceiving what is true and what is not.

"Actually, it changes us in such a way that we somehow lose ourselves and every decision we make, we make in relation to what we did or what we didn't say, and that is exactly what happened with Mitar", concludes Marković.

"I am grateful for the director's assessment that I play five completely different characters, different people, with different stories, it was very challenging. Now we are in a phase where we can't wait for the audience and the reaction to everything we did", says Vukčević.

Actor Goran Vujović says that it was a big challenge to work on the character he plays, because he is the embodiment of evil.

"On the other hand, I am happy I was part of this process. We had an excellent template, that is a novel by Ognjen Spahić, the dramatization and adaptation were excellently done, we had a great and calm director. I hope that we have a good play and I invite the audience to come", says Vujović.

Actress Jelena Laban highlighted the exceptional collaboration she had with composer Nina Perović during the process.

"In this play, I play several different roles, so I appear several times in a different function, and that was very interesting to me, because I had never encountered with changing roles in such a way before," Laban points out.