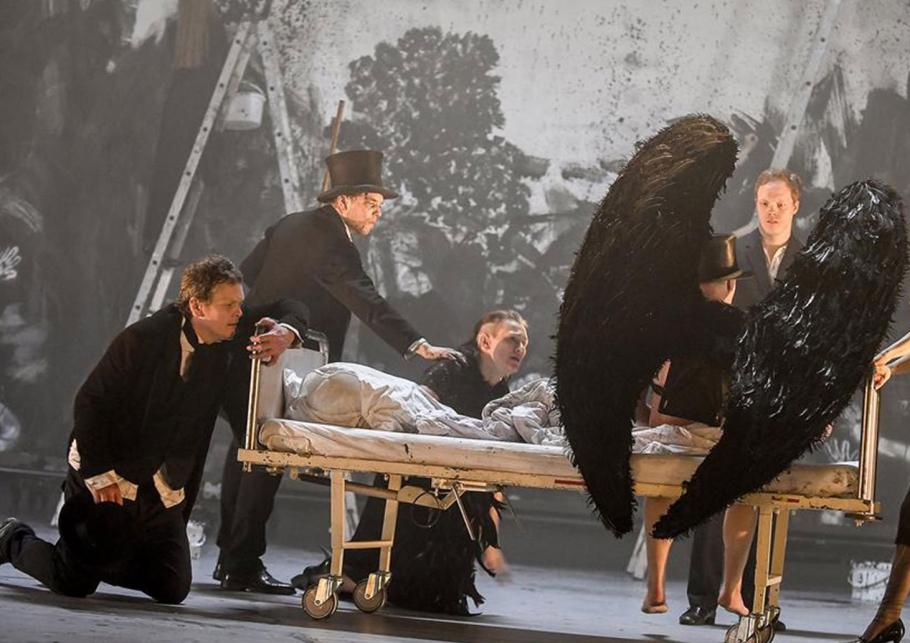 The Staatsschauspiel Dresden is in festive mood! We are glad to pronounce that four productions will be shown at remarkable theatre festivals in May!

Two performances have been selected to the Berliner Theatertreffen 2019. Das große Heft (The Notebook), based on the novel by Ágota Kristóf under the direction of Ulrich Rasche, and Erniedrigte und Beleidigte (Humiliated and Insulted), based on the novel by Fyodor M. Dostoevsky directed by Sebastian Hartmann are two of 10 outstanding productions.

Ulrich Rasche’s interpretation of the anti-war novel Das große Heft (The Notebook) based on the French novel by the Hungarian writer Ágota Kristóf is one of them and will conclude this year’s festival edition of Berliner Theatertreffen on 20 May. The novel tells the story of two brothers who are raised by their grandmother in the countryside during the war. Far away from formal schooling, the twins teach themselves what they need to survive and become pitiless young adults who will stop at nothing. The premiere took place on 11 February 2018.

“Ulrich Rasche’s choral art is devised for grandeur, for pathos, for powerful imagery and sensory overload. Some may say that it smells like Rammstein. All of this is true. But like hardly any other director, Rasche lets us hear texts in new ways, unfolding them in front of the viewers’ consciousness with the most precise rhythmisation, inspiring and exciting their thought processes. Spellbound, we follow Ágota Kristóf’s wartime childhood stories for nearly four hours. It is a dark piece, full of violence and sexual obsessions, presented with brittle and artful behaviourist storytelling. At a leisurely pace, Rasche traces the stories with oppressive intensity, his male choirs striding on huge rotating discs, driven by Monika Roscher’s minimalist sound art. It is a look into a fascist, militaristic childhood world, purged of all morality, a stroll into the rolling mill of bourgeoning male fantasies.”

For Erniedrigte und Beleidigte (Humiliated and Insulted), Sebastian Hartmann interpreted the novel by Fyodor M. Dostoevsky in a new way and used also parts of the Hamburg poetics lecture by Wolfram Lotz. Tilo Baumgärtel designed the scenery for the play: During the performance, the actors walk on 5-metre-high ladders and finally paint their own stage set live. The premiere took place on 29 March 2018.

"In a looming mist, stirring music resounds and people storm to the edge of the stage. They haul in ladders and begin to create a gigantic picture with black and white paint – higher and higher, layer upon layer. A wheeled hospital bed revolves in front of it and actors in swishing crinolines and black top-hats present ostensibly incoherent and recurring scenes from Dostoevsky’s serialised novel “The Insulted and Humiliated” about an egotistical patriarch, abandoned children and crushing mountains of debt. It takes a while for the audience to find their bearings around the improvisation modules of
Sebastian Hartmann’s Dresden production. Almost programmatic in character, the production is interwoven with Wolfram Lotz’ Hamburg poetics lecture, outlining principles for a new theatre and performed in a spoken dance by Yassin Trabelsi with a fine sensitivity for sound. Hartmann’s staging is not a linear retelling of the novel’s plot, but rather – and this is already inherent in Dostoevsky – aspires to an ecstatic dissolution of sense and logos of the kind that can be experienced in illness, love and, in this case, in art."

The complete programme will be published on 5 April 2019 at www.berlinerfestspiele.de

Also honored: The documentary theatre play Operation Kamen directed by Florian Fischer has been invited to “Radical Young, the Festival for Young Directors” at the Volkstheater München. In 2014, the director received the audience award at Fast Forward – the European festival for young stage directors and was also invited to Radical Young in 2016 and 2017.

Operation Kamen is his first production at the Staatsschauspiel Dresden, created in cooperation with the Archa Theatre in Prag. The festival promotes young directors all over the world. 15 productions will be shown from 27 April to 5 May. The jury selected 15 out of 90 productions.

Florian Fischer’s production tells about the events of Czechoslovak post-war history between 1948 and 1951 in a documentary theater evening. He analyses secret service strategies. How true is fiction and how did reality invent? The audience will be equipped by headphones and can listen to the history and performance.

The fourth festival invitation is on 15 May: 9 Tage wach (Awake for Nine Days Straight) by Eric Stehfest and Michael J. Stephan in a version from John von Düffel will open the 23th Divadelní Flora Festival in Olomouc Czech Republic.

The novel was performed for the very first time on the Dresden theatre stage by the Director Sebastian Klink. Eric grew up in Dresden and at the age of 14, he came into contact with the party drug Crystal Meth. His great-grandfathers were bomber pilots in World War II and used amphetamines to loose their fear of killing and being killed. In the basic substance, it is “the same stuff” that Eric consumes to feel invincible, to celebrate for days and, in short, “to fly”.

The Staatsschauspiel Dresden under the direction of Joachim Klement is glad to be invited with four productions to three prestigiously theatre festivals in May.