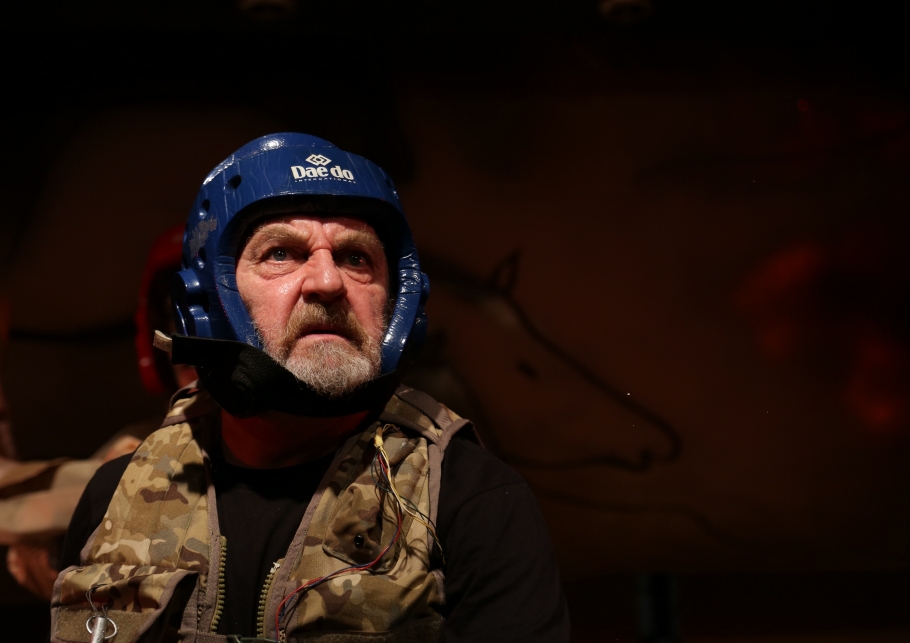 Frenzy for Two
Directed by Konstantine Abashidze and Levan Svanadze, based on the play Frenzy for Two or More by Eugène Ionesco

The Slovensko Narodno Gledalisce Nova Gorica is hosting the Georgian play ‘Frenzy for Two’. Directed by Konstantine Abashidze and Levan Svanadze, the work is based on the play Frenzy for Two or More by Eugène Ionesco is about the eternal problems of the relationship between men and women.

The play describes a couple's locked-in life, a microcosm, set against the backdrop of civil war. The directors generalized the problem and, without a historical perspective, presented the human element - in this case the couple’s evolution and reversal from ancient times to the present day and vice versa. When severe social or existential crises occur, time, space, knowledge and skills acquired through experience slowly disappear, and a person begins to fight them with wild instincts.

Describing the exchange, the two theatres wrote: Kutaisi and Nova Gorica are both National theatres located in smaller cities and are thus natural exchange partners. Slovenia and Georgia have some historical diplomatic relations but are mostly limited to sports and economy. This exchange would hopefully kick off a more meaningful cultural exchange between the two countries. The purpose of the exchange between Slovene National Theatre Nova Gorica and Kutaisi Lado Meskhishvili Professional State Drama Theatre is cultural integration of our peoples, creating a cultural foundation and building bridges that will become an opportunity to create endless paths of various disciplines of art, as well as politics, since Tbilisi and Ljubljana are twin cities, we could discuss making Kutaisi and Nova Gorica twin cities in the future.