Participatory is not just about bringing individuals in and showing their traditional dances, but it's about how it shapes the working structure of the institution. 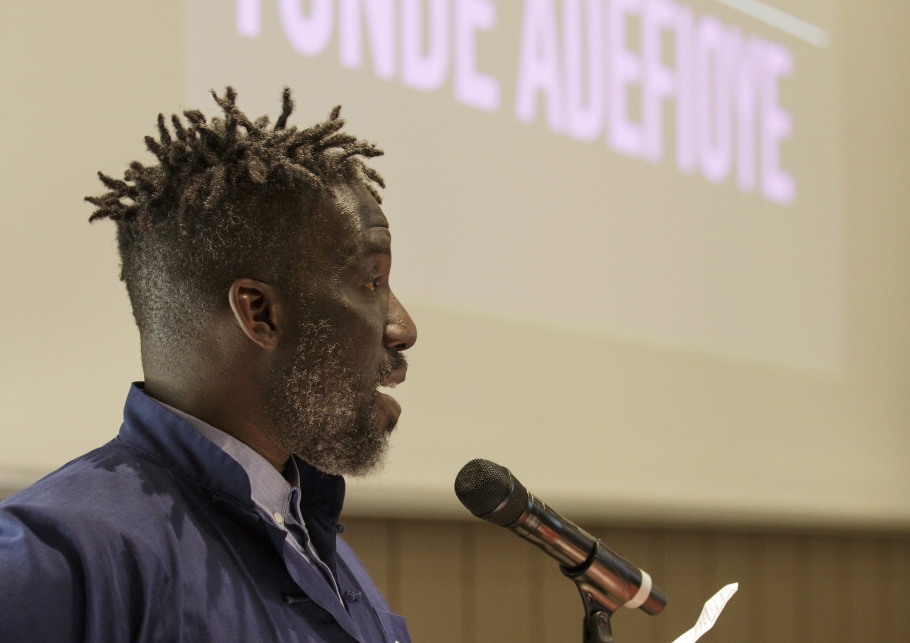 The title of this piece alludes to a production cre­at­ed together with some young people in Manchester at Contact Theatre. I’d like to give you an overview of the theoretical starting points that I use to inform the work that I do at the KVS (Koninklijke Vlaamse Schouwburg, Brussels/Belgium).

Intersectionality is a term that is currently being ban­tered around more and more. Professor Kimberlé Crenshaw, a professor of law and critical race theory at UCLA and Columbia University, coined the term in the 80’s while she was working on a law case. Even before that point, intersectionality has always been a thing. You had people like Claudia Jones, Paul Robeson, Audre Lorde and James Baldwin who have embodied intersectionality.

The three women who initiated the Black Lives Matter movement, Alicia Garza, Opal Tometi and Patrisse Cullors, have been crucial in the understanding of intersectionality over the past 7 years. I encourage you to check out their website and their platform statement, as part of the work they do is about the idea of diffused leadership models; a concept which I find very interesting for our cultural sector. This is an extract from their statement which embodies intersectionality, especially as we live it in 2019:

“We believe in elevating the experiences and leadership of the most marginalised black people, including but not limited to those who are women, queer, trans, femmes, gender non-conforming, Muslim, formally and currently incarcerated, cash-poor and working-class, disabled, undocumented and immigrants. In recent years we have taken to the streets, launched massive campaigns and impacted elections but our elected leaders have failed to address the legitimate demands of our movement. We recognise that not all of our collective needs and visions can be translated into policy but we understand that policy change is one of many tactics necessary to move us towards the world we envision. We can no longer wait.”

In 2016, using this concept of intersectionality, Sabrina Mahfouz was approached to be one of the first artists to lead SLOW—Slam Our World. Michael De Cock, artistic director of the KVS, asked me to create something using slam poetry that worked through to theatre and SLOW was a result of that brainstorm. An artist like Sabrina Mahfouz, who is Egyptian and British based in London, is invited for a three-week residency in Brussels. In those three weeks, they meet with local actors, local players and a diverse array of individuals. With each SLOW, we ask a different question. The question in 2016 was “In the context of Brussels, what is Muslim feminism?”. As many might remember, 2016 was the year bombings took place in Brussels. The question was pertinent then and one that we need to continue to ask ourselves. Those who understand intersectionality will know that question is looking at the intersection between gender, religion and ethnicity.

Also, in this type of project, it’s important to make sure that the power dynamics really shift. That it’s not me as a city dramaturg, as part of the artistic team of the KVS, determining the layout of the whole project. That it is Sabrina Mahfouz, together with the individuals she meets along the way, determining the outcome of the project.

Another way that intersectionality seeped into our programming was in October 2017 with Beyond the Binary when we asked The Warrior Poets, a Brussels-based queer (lesbian) organisation inspired by Audre Lorde, to curate a night looking at the intersection of queer identity, ethnicity, gender and class. The Warrior Poets, a collective of two women, invited a Somalian poet, a femme dancer/performer from Afghanistan (both based in Amsterdam), and the London-based collective Sorry You Feel Uncomfortable, who pretty much took over the KVS box space. It really shifted the way the KVS team worked. I remember my colleague from the technical team saying “I’ve never worked like this before... I’m amazed at the outcome and I’m really glad that we got to do this type of project in the KVS”.
Participatory is not just about bringing individuals in and showing their traditional dances, but it’s about how it shapes the working structure of the institution—from the technicians, to the communication, to the artistic team.

The next theory that I would like to frame for you is the understanding of decolonisation, anti-colonisation and post-colonisation. Like intersectionality, these are hot buzz words these days and the circle that you are in, determines how you feel about these terms.

I was at an important school in Antwerp that trains actors and theatre makers (I won’t name names) where I was supposed to start teaching in 2019/2020. In my first meeting I met one of my future colleagues. I had been informed that a student of colour had decided to no longer attend his class. He said, “Yeah, she doesn’t come to my class anymore” and I replied, “Wow, you’re very flippant about this reality, you should be worried”. The coordinator said “She doesn’t go to the class anymore because he used the n-word”. That’s problematic and that’s something that we need to take seriously. For that student who is a young Moroccan woman, hearing this white man in his late 60s using the n-word is a form of aggression and she doesn’t feel safe in that space.

Later, the other coordinator told me “In addition to asking you and others to come and teach this class, we would also like to organise a symposium. But we’re not going to call the symposium ‘decolonisation’ because it’s an aggressive word.” I don’t use the term all the time but it’s an important term in relation to the work I do, how I see myself and where I come from.

Professor Gloria Wekker, former head of the Gender Studies department at Utrecht University, wrote the book White Innocence. I encourage you to read it because it looks at the Dutch context in terms of colonisation and how the colonial project still informs society today. Part of what she says is, “An unacknowledged reservoir of knowledge and affects based on four hundred years of Dutch imperial rule plays a vital but unacknowledged part in dominant meaning-making process, including the making of the self, taking place in Dutch society”. Replace Dutch society with German society. Replace German society with French society. Replace French society with Belgian society. You get the point—there’s a lot of work that needs to be done.

The last term that I would like to address is ‘exotification’. Hillbrowfication is a perfect example. Professor Joachim Ben Yakoub, who is Tunisian-Belgian, said in relation to Moussem festival, “In his study Orientalism (1978), Edward Said warns not to underestimate the consequences of a widespread internalisationand reproduction of the dominating Western cultural discourses embedded in the canon. Can one thus construct a new consciousness, as proposed by the festival..”. Maybe one can also apply it to this festival in Dresden. He continues “by referring time and again to a normative body of work and normative concepts without reproducing the entrenched historical power relations?”. Some of you might be wondering or maybe not be wondering “why is Hillbrowfication a problem?”. I don’t know the background; I don’t even know the artist and I wish I had time to talk to them. But it’s a problem to me because I see inherently a problematic power relation in terms of who gets to decide where the money comes from and who gets to decide what is done with that money. Hopefully we try to move away from that type of exotification, if not exploitation.

In closing, living in a context like Brussels, it is no longer okay to have an ensemble, to have a theatre company, to have one of the most important theatre institutions in Flanders be non-representative. The ensemble of the KVS today consists of individuals from different cultural backgrounds, different countries, because it’s important that the people on stage reflect the people that live in the city. It’s crucial that in 2019 and beyond, your ensemble looks like this. It is a result of looking at who has the power and resources from the major institutions to tell the stories that they want to tell and how they want to tell them.

I want to share a quote from Bell Hooks’ essay Eating the Other: “The desire to make contact with those bodies deemed other, with no apparent will to dominate, assuages the guilt of the past. Even takes the form of a defiant gesture where one denies accountability and historical connection... The desire is not to make the other over in one’s image but to become the other”.

I was asked to talk about city dramaturgy and I hope that you have a better understanding of the work that’s being done at the KVS. But I also found it crucial—because I knew what my audience would look like—to ask critical questions that hopefully make you question the work that you do, how you do the work and the space and power that you occupy. 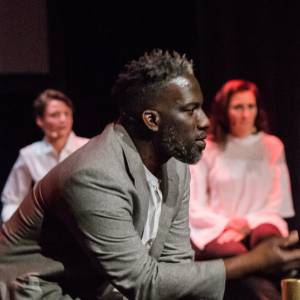 Tunde Adefioye co-founded the youth platform Urban Woorden in Leuven (Belgium). In 2016, he began as city dramaturg at KVS, Brussels’ Flemish city theatre. Additionally, he has done dramaturgy for plays and projects including Malcolm X and (Not) My Paradise. Since 2017, he has been delivering lectures and speeches, including a keynote at the 2019 ETC International Theatre Conference in Germany and at Wales Arts International’s conference.