The aim of the performance Long Live Regina! was to give a space and a voice to people who are oppressed; to give them an opportunity to speak for themselves in a public place rather than being spoken about by others. 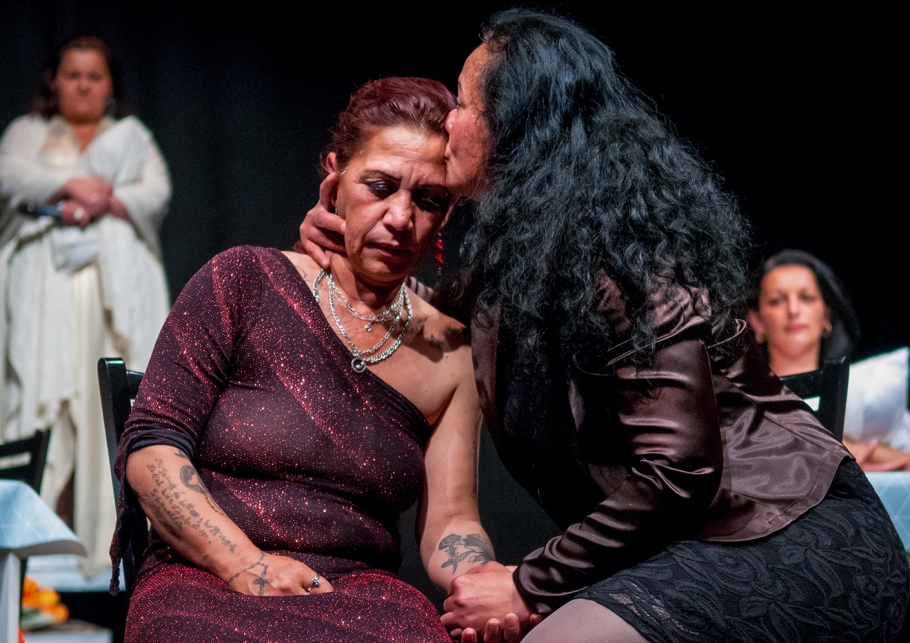 It should be noted from the outset that the performance Long Live Regina! is part of a complex, art-based research project that uses different methods such as sociodrama and digital storytelling. In this text, I will focus on the devising process of Long Live Regina!, which was created within this framework.

At Self-Theatre, we use the term ‘autoethnographic theatre’ for participatory plays, since they are based on the personal stories of a minority group with specific social experiences.

It is important to say that, in Hungary, the Roma are among the poorest and most oppressed people. In the performance, Roma women tell their personal stories about motherhood and the Hungarian healthcare system. They all live in the small village of Szomolya, in the poorest region of Hungary, located in the northeast.

Since such a participatory theatre project raises many different professional questions, I would like to address five important aspects of our devising process: the goals, the team, the methods, the locations and the audience.

The aim of the performance Long Live Regina! was to give a space and a voice to people who are oppressed; to give them an opportunity to speak for themselves in a public place rather than being spoken about by others.

For me, theatre is both a social event and a moral institution; a place of communication and education. Its purpose is to speak about today’s social problems. In Hungary, all segments of society are imbued in authoritarian or hierarchical thinking, which brings about social injustice and oppression. And I believe it is precisely here that the task of the theatre lies: to bring these problems and inequalities to the fore.

Long Live Regina! is a mo­del or an opportunity for eman­cipating and equalising society and theatre. It is an opportunity to see ourselves
and the actions happening onstage from a new  perspec­tive.

What kind of experts are needed in the participatory theatre process? A project of this nature requires working with people from various fields. Our team was very diverse, which was challenging to be sure, but also rewarding. We all learned to coordinate and discuss our different approaches to the project in order to reach a common goal. The manager of the project was a cultural anthropologist (Kata Horváth); the professional staff was made up of a local social worker (Irénke Lázár Györgyné), a sociodrama expert (Judith Teszáry), a digital storytelling expert (Anita Lanszki), two professional actors (Lilla Sárosdi, Fruzsina Háda), a dramaturg (Eszter Gyulai), a photographer (Gabriella Csoszó), an assistant (Orsolya Fóti) and me, Edit Romankovics, the director and an expert in theatre pedagogy.

We worked for nine months on Long Live Regina! The first six months involved community development and the collection of material. During that time we worked with two methods: sociodrama and digital storytelling. After this period, the script of the performance was written. Using the material we collected, we chose one central question and twelve stories, and the play was built around them.

In theatre, directors are traditionally at the top of the hierarchy: they are the ones in power. But that doesn’t work in participatory and community theatre. It was a serious challenge in our performance, as the women had come from a totally different social class from me. As a middle-class Hungarian woman, my presence generated distrust and opposition since I was one of the oppressors. During the rehearsals, we put a great deal of effort into creating an atmosphere of trust to ensure the actors knew that this performance was for them and represented their interests. As a creative team, we brought our professional experience to the table above all for them, not for our own self-fulfilment.

The rehearsal process required me to be flexible and perform ongoing coordination work. I had to be ready for changes when the process took another direction. I needed to prepare for rehearsals that took different perspectives into account and be open to new ideas. I had to adapt to the mood and dynamics of the group as well as to the individual needs of the group members. This process is mainly based on partnership and equality, in which the role of the director is to facilitate and help. It was very different from any traditional way of directing.

During the devising process, we asked ourselves two questions: Where, and in what context, is it worth performing this play? And: What sort of audience is it worth putting on the performance for? Our first show was in the village of Szomolya, where the women live. The second performance was at the university of the nearby town, Eger. The third was at one of the theatres in Budapest. Later, we performed in the countryside for a Roma audience and were invited to professional theatre festivals.

We always performed the play in front of different groups of spectators and after every show we had a talk with the audience, which was a way for us to involve the them in the theatrical communication. It also meant that the audience chose the discussion topics, which gave us a wide range of impressions given that we played in front of so many people with different social backgrounds.

Regarding these last two aspects, one of the actresses in the performance, Zsanett Horváth, shares her personal experience here:

“Our first performance was in Szomolya, my village, which is actually our village, the performers’ village. It has a population of 1,600 people. Everybody knows everybody. The biggest issue in our village is shame. Everything is shameful. It was the hardest of all of our performances. Just to be speaking openly in front of our families and neighbours about issues that we are all aware of but don’t speak about. After the first performance, we all cried, and I think it was because we could really prove that we are not only good for cleaning houses and washing things, but are able to perform and do worthy things.

Another performance was in Trafó, a theatre in Budapest. Here it was also an opportunity to prove ourselves and speak up about important issues like what is happening in the healthcare system, to us and to others, but maybe especially to us. Later on, we put on a performance in Roma communities in the Hungarian countryside. Our goal there was more about helping the people by telling stories. And that was the idea of the experience: to share stories, recognise similarities and see that we are not alone with our stories, that they are not shameful. It makes people stronger. It was a very new feeling for us that we could help other people just by telling stories.

I think that the most important thing I got out of this process is self-confidence. I realised that we are not alone in our own social setting or family, and that we can talk to other people without shame while learning from these interactions and experiences.” • 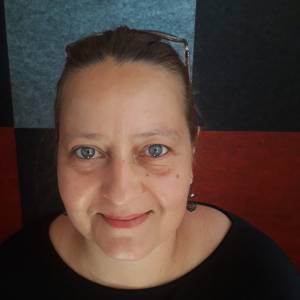 Edit Romankovics has a special­isation in theatre and education. Over the past 25 years, she has taken part in TIE (theatre in education) performances, com­munity and participatory theatre projects in Hungary. In these projects, she has worked as an actor, a teacher, a writer or a director. She also delivers workshops and courses on this topic.