On the process of opening satellite stages in Tbilisi and Oslo 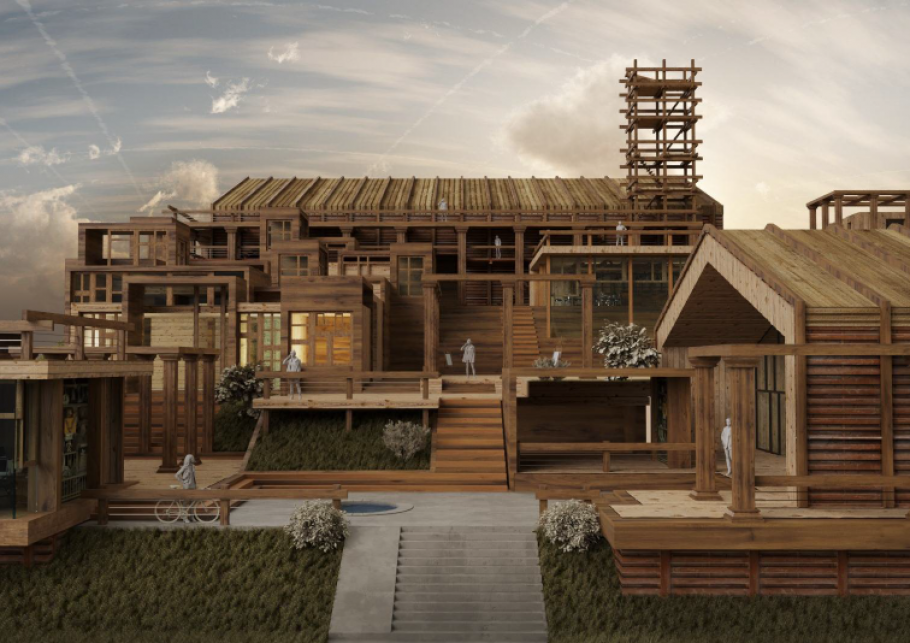 ETC Member Theatres Kote Marjanishvili State Drama Theatre (Tbilisi/Georgia) and Det Norske Teatret (Oslo/Norway) have been established in their nations’ capital cities for many decades. Now, both institutions are expanding their horizons by developing new stages on the outskirts of their cities. With the desire to diversify their artistic output and develop new audiences, both theatres are creating spaces with and for the local communities.

In January 2019, Det Norske Teatret moved to Rommen Scene and joined forces with a community centre in a suburban area of Oslo called Groruddalen. Situated in a school, the 200-seat theatre was already an established part of the local community, hosting a variety of local amateur groups, schools, choirs, marching bands, film clubs and voluntary groups. For Tbilisi, a brand-new Theatre City will be built and plans to open in 2020. It will have several stages, residency places, a conference hall, a new technology lab and a theatre kitchen.  We asked them about these new projects...

What inspired you to open a new stage?

Ekaterina Mazmishvili: We had three stages in Marjanishvili Theatre. The third one, the Basement, was opened in 2013 in an old, abandoned basement of the big complex, just in front of the Theatre. Over the years, it became clear that we needed to move and find a new, bigger space. So, we left the Basement and began a new adventure. This adventure became more adventurous than we anticipated and instead of looking for a new venue in the centre of the city, we went one step further. We thought that it would be more interesting if we defy convention. After several months of searching, we found a new area where not only a new venue could be built, but the new Theatre City in nature, with beautiful surroundings and perspective.

Tine Lunde: The decision of opening a new stage was a mix of several wants and needs. Our main house has reached a limit of productions and performances, so we wanted an additional performing space in order to continue our growth. In addition to this the theatre had a desire to reach new audience groups. We have in the previous years made some productions that challenge the traditional view on what theatre can be, with projects that mix theatre and hip-hop, projects with non-actors on stage, normal youths telling their stories in a theatre wrapping. We found that these projects both broadened our horizons, by giving us stories we would not easily have found otherwise, and it added a new dimension to our audience’s experience of the theatre. This gave us the idea of establishing a stage where we could work differently and more directly with the audience and their stories. The final aspect of this decision was the wish to change the cultural and ethnic monotony we often see in our audience, on the Norwegian theatre stages and behind the scenes. The area in which Rommen Scene is located is an area of a diverse population, many of which do not have a relationship to the institutional theatres at all. By bringing the theatre to their neighbourhood, telling their stories and asking them to join in our projects, our goal is to lower the threshold for new audience groups to visit the theatre.

T. L.: We felt that it was important to follow up on the successful projects we had made in the past years, while the momentum was there. The hip-hop project “Blokk til blokk” had all through 2018 played for sold out houses at each of our three stages, and the artists fronting that project are from areas close to Rommen Scene. We thought that an opening of Rommen Scene with their production would give us the gateway into the local community that we needed. In addition to this the Cultural Ministry released some funds aimed at activities initiated by the cultural institutions with a focus on increasing the cultural diversity. So the timing seemed perfect.

E. M.: Why not now? Now is the best time. Ideas come to mind exactly when they need to come to life. Later, it will be too late. 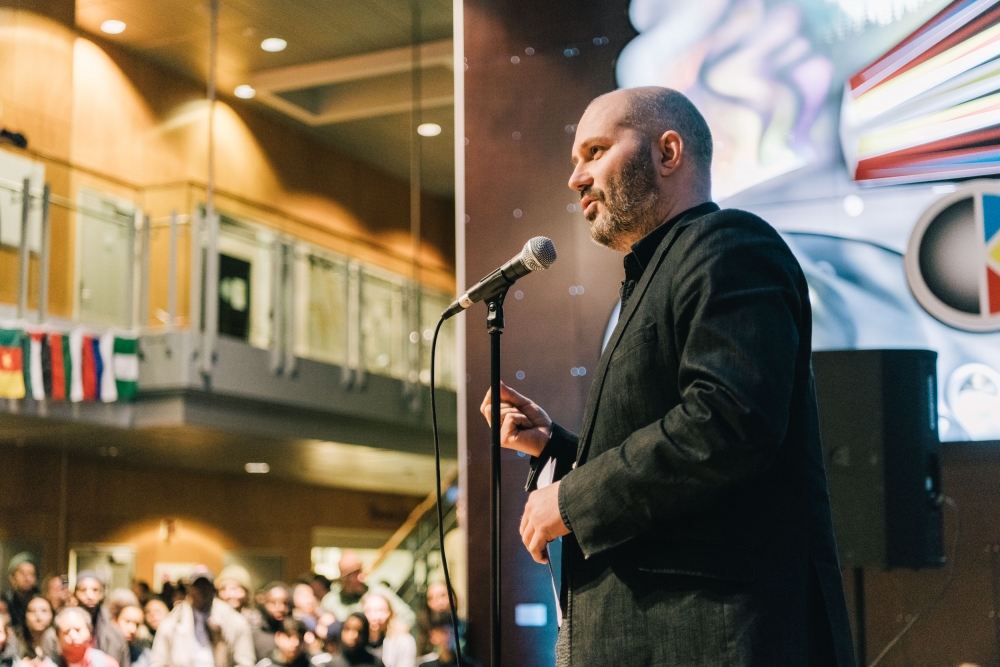 Did you receive input from the local community when conceptualising this new space?

T. L.: Our opening of Rommen Scene happened very quickly. The funds from the Cultural Ministry was granted in mid-October 2018 and in January 2019 we opened with a performance of “Blokk til blokk”. This was of course only possible because the infrastructure of the space was already there. As this became a collaboration with the administration at Rommen Scene we could use each other’s experiences. But it is honest to say that this first year is very much a pilot year for our engagement at Rommen, and that we are learning as we go. Some projects this spring were a great success, and some were not. As we plan for the autumn and for 2020 we have a greater focus on including the local community in more of our projects, something which was hard to accomplish this spring because of the short time we had for planning.

Did you change any of the architecture of the existing artistic centre?

T. L.: We have not made any changes to the architecture, but we have supplied the stage with some extra equipment, mainly lights. The lighting rig is doubled, and we have made sidelight bars in the wings on both sides.

As you are building this new centre from scratch, can you tell us about the architectural choices you are making?

E. M.: The Theatre City will be built of wood mostly. The architectural style will be, let’s say, “eclectic” on purpose. Some parts will be like old Tbilisi houses on mountain slopes with narrow streets and beautiful balconies, with small wine basements and big piazzas. The other part could be Swedish minimalism or we will also use Greek antique palace details. We will have small squares, gardens around the theatre, small bridges and places named after great masters. And modern technology on top of everything - imagine. Something like timeline or impressions from history with present priorities. 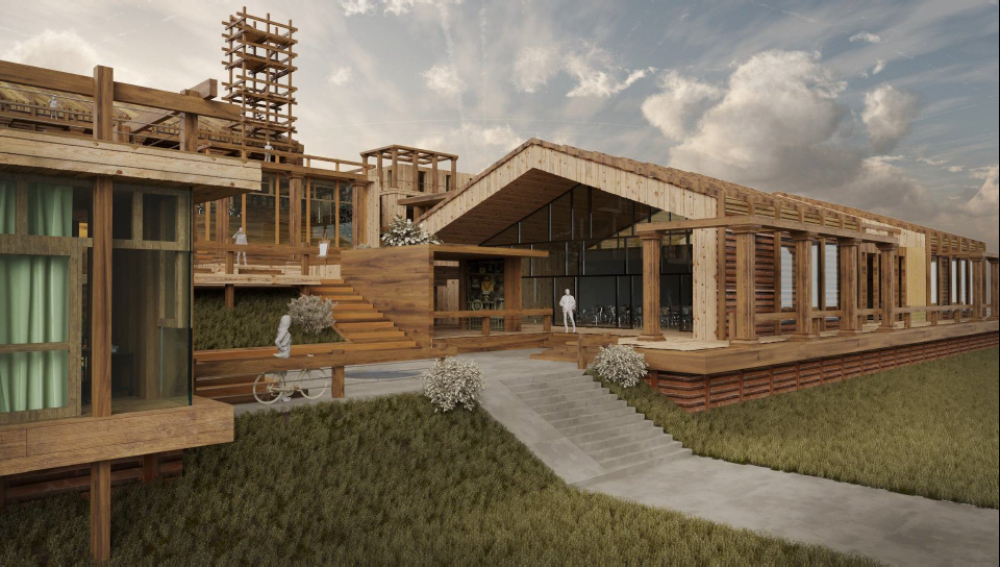 You’ve described opening the Rommen Scene as a “new artistic and political chance for the theatre”. Can you elaborate on this?

T. L.: In the 2019 budget, the Cultural Ministry had a distinct focus on diversity and integration in the cultural sector, where the institutions were challenged to look for projects to include a greater variety of the citizens. Det Norske Teatret has worked on increasing the diversity in the theatres for years. In 2012 we started an acting education for students whose family background was from outside Europe, Det Multinorske. We’re also co-owners of a theatre school for children and young people aged 6–26 from a variety of cultural and social groups all over Oslo. When it was established in 1912, Det Norske Teatret was a theatre for the outsiders, the people moving into the city from the countryside. It became a symbol of the antagonism between the bourgeoise classes and the people. Det Norske Teatret still finds that it is our task to investigate what it will say to be Norwegian in modern Norway, and who are the outsiders today, the opponents to the established classes. The engagement at Rommen Scene is a continuation of this, and a way of showing the politicians that we take this responsibility seriously.

Do you also see the development of Theatre City as a political opportunity?

E. M.: Theatre is of course political chance. A new space, even more so. This is a new challenge and a possibility of sustainable development in culture. We claim that we are the fourth most important driving force in the economy. So, it is a political opportunity as well.

How is the artistic direction of these new stages different from the ones of your current theatres?

T. L.: Rommen Scene is run by an artistic group consisting of four members, together with the artistic director at Det Norske Teatret, Erik Ulfsby. The four members are Anders Hasmo (dramaturg), Belinda Braza (choreographer), and Cici Henriksen and Hedda Sandvig from the independent group SPKRBOX, who produced “Blokk til blokk”. The artistic group is responsible for programming and creating new projects at Rommen Scene, such as devised projects, projects with the local communities, workshops etc. The theatre’s artistic team programme one or two main productions a year and decides which productions will be transferred from the main house to Rommen.

E. M.: We have already started working on the artistic planning for Theatre City and it will not be too different from Marjanishvili.

Can you tell us about the local and national support you’ve received for this project?

E. M.: The Ministry of Education and Culture of Georgia has provided a grant to support the building of Theatre City through and the Ministry of Economy gave the land free of charge (9500 m2). We are also talking with potential international and local partners.

T. L.: We received funding from the Cultural Ministry and from the municipality of Oslo. In addition, OBOS, the largest Nordic cooperative building association, joined as a sponsor. So far, we have not felt any opposition to this project at all. It has been met with positivity and excitement both locally and nationally.

How will the staff structure differ with these new projects – have new artistic/logistical teams been created?

T. L.: In addition to the Rommen artistic group, we have appointed a project manager to work with this project. We are also in the process of hiring a technician, who will work mainly at Rommen. This will make the stage more independent of the planning and programming at the main house. The projects at Rommen will vary in size and resources, but the main structure will be projects that can be run by the one technician, together with the artistic teams put together for the different projects. The Rommen artistic group will work with projects that will have the opportunities of lab projects or workshops, more than complete productions. This gives us the chance to explore more stories and play with themes, forms and visual ideas in a different way to the main house.

What is your vision for the future with your new stages?

E. M.: The artistic/theatre heritage of Tbilisi is rich. Tbilisi depends on art, theatre and culture and not only for the quality of life. Our vision is to create a new creative life, squeezed into an almost 1 hectare grid. There will be creative and educational processes with experiments of theatre and new technology, venues and places with an emphasis on a healthy cultural climate. We would like to help educate and inspire our citizens and stimulate creativity and freedom in creativity. We want to attract talents and grow their economies.

T. L.: Our vision is that Rommen Scene can be a stage where creative teams feel that they can move outside the borders of normal theatre production. We want to invest in stories, artists and people that usually might not get a chance on the institutional stages. We want to find new visual expressions, new voices, new ways of telling stories, in order to attract new audiences from all over the city. We also wish to strengthen Rommen Scene to become a vibrant and diverse culture house, that can function both as a local community centre and a professional stage.