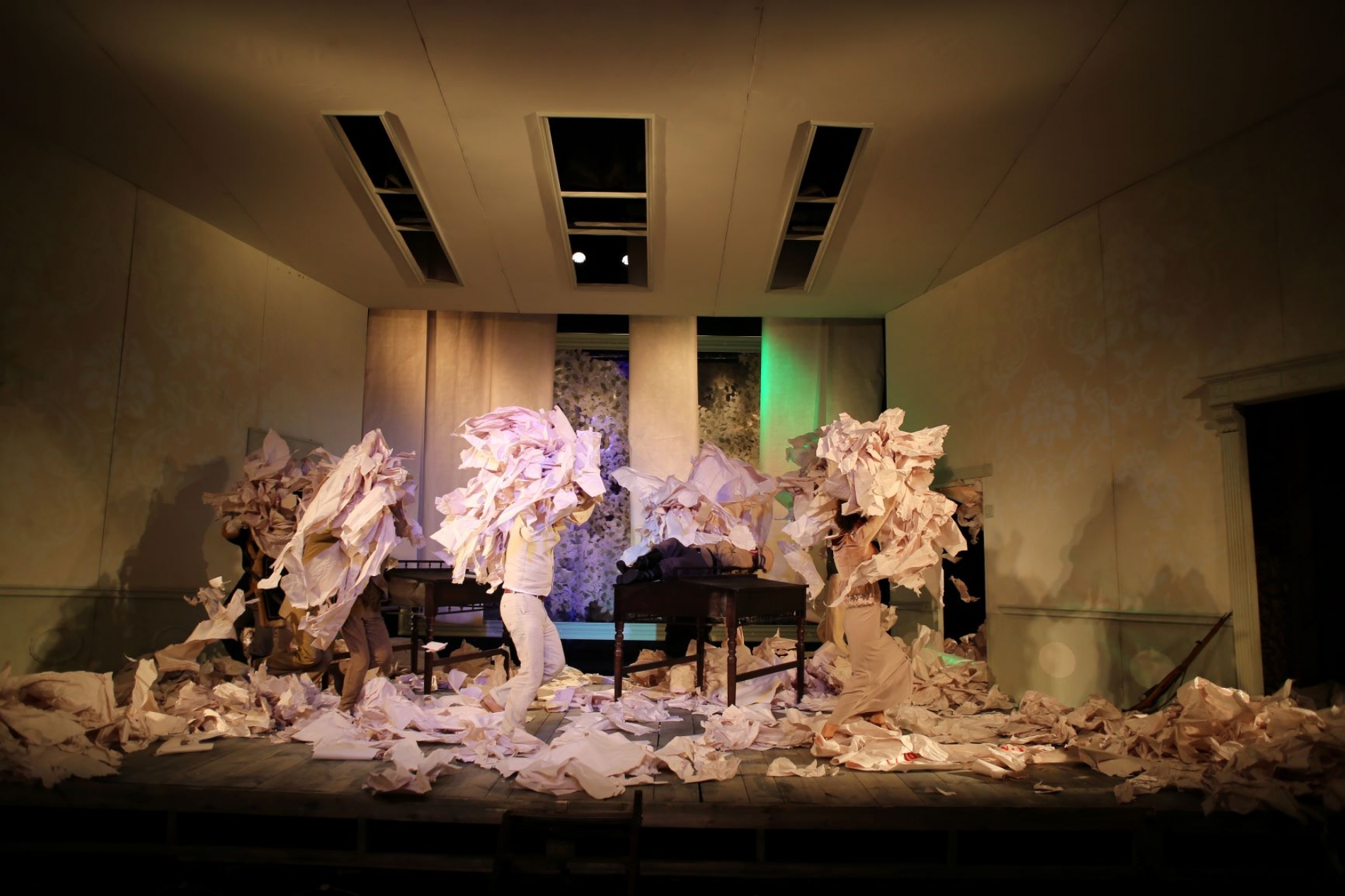 The story takes place in the early 20s of the 20th century... Just not long ago the First World War concluded, five of the empires were broken-up, small and delicate Georgia is on the verge of its history- The future is unknown to all…Russian Empire is left in past, present stands on a fragile independence and time ahead is full of mystery…Georgia is like an island, stuck between the broken empires… David Kldiashvili’s flabbergasted and silent heroes are trying to save and keep their little gardens and houses. But time and pigs from neighborhood destroy their humble crops…They say, these pigs belong to a new neighbor, someone whose name is Bakula…The pigs create enormous noise. Is it possible that pigs of the invisible Bakula are capable of making such noise? The garden known to be so innocent and small to the time and history- the small garden of Galaktion Kokhreidze, the garden destroyed and restored many times – is again attacked by new enemies... 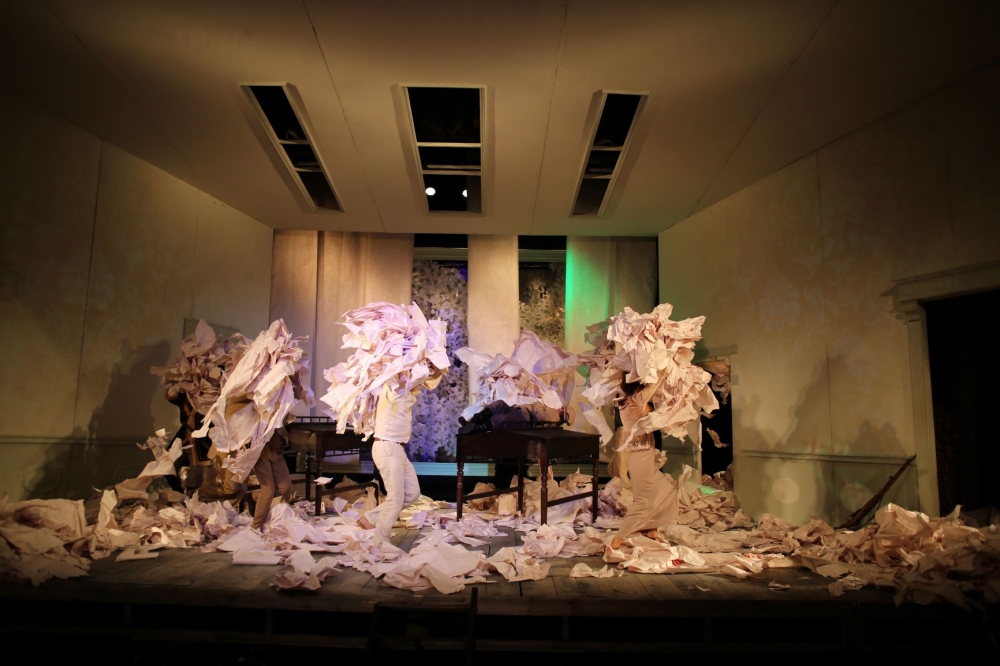 Reality and simulation. The Navigator is a story about a man well-adjusted to solitude - the story about Rostom, who is torn out of his comfort zone, out of his house, room, his habits and obsessions. He is well adapted and even in love with his inferiority complexes; he considers himself as a dissent and fair, a man whose father constantly insists on him to get away from his solitude and create a family before it is too late; a man, who thinks, that his co-worker, Clara, will never like him, but encourages himself that he still has some kind of affair with her. In any case, Clara’s signs are meant only for him.

The Navigator is a story of compensations - when reality and imagination do not match each other and when dejected by reality “light” and a cute psychopath Rostom wants to escape it. Because reality is new and stern technologies, co-workers without emotions and content, egoistic and passionless director, aggressive and bad-mannered parent, cold and arrogant Clara - and it is closed and unfriendly to him. It is a story about the navigator’s voice and Rostom’s love - a woman’s voice that indicates to him road signs, becomes his one only and mostly important reality.  Since in Rostom’s empirical world anything else except navigator is plastic, artificial and simulate. 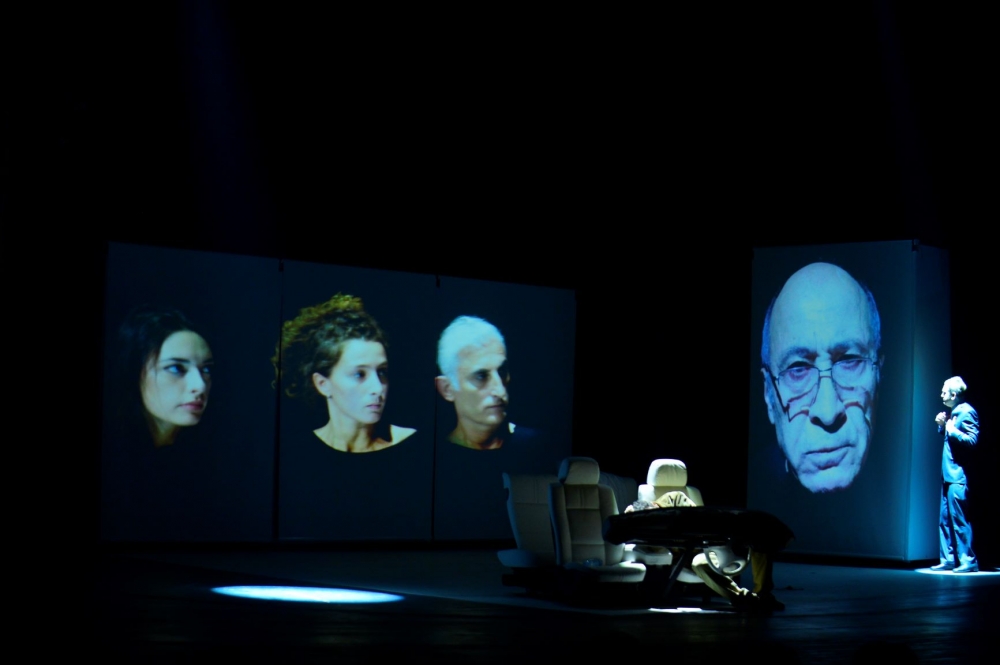 "…Listening in on phone conversations, secret video recordings, spying - these certainly help an investigation. However, without permission from an investigative institution, the use of such material should not only be permissible, but its existence should be entirely concealed. There is a concept that one, to at least some extent, should have a private life that is as protected as the state itself."

"… A few days ago, my friend and I were walking down the street discussing some topic, I can't quite remember what it was. He asked me if I knew the difference between the mechanics of modern-day politics and those of the middle Ages. In response to his own questions, he told me that their differentiating factor was technical facilities. I asked him what he meant. He told me that in the Middle Ages God, with his long white beard, gazed down at the people of Earth from Heaven and judged whether a person was worthy of salvation or deserved to burn in Hell. He reminded me of the Eye of Providence depicted on frescoes. "This omniscient, all-seeing eye", he said "is high up on the wall close to the ceiling and it is called a video camera."

Mikheil Charkviani's new play is an art performance of sorts. It concerns the violation of the privacy of one's personal life. Seven characters consider this phenomenon, eventually leading to the breaking out of violence among them. 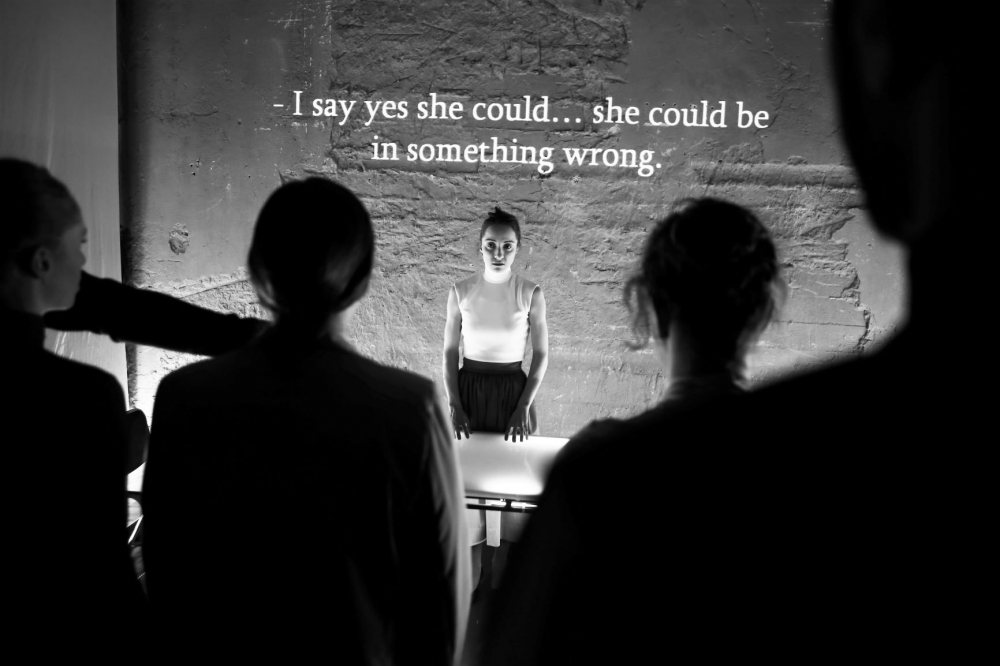 Full of humor, the play gets us into a very interesting world of theatre. Tsubak – the writer - writes comedies only. He works in a theatre that is called the University of Laugh. He needs to get permission for his new comedy that will open a season in Theatre. Neo is censor. She was appointed recently. Before that, she was a leader of labor movement in Manjuria. The performance shows us the 7 days relationship of writer and censor. Everything happens in an office of censor, which is full of banned plays. They are marked with red notes. The play is about the relationship of censor and play-writer. 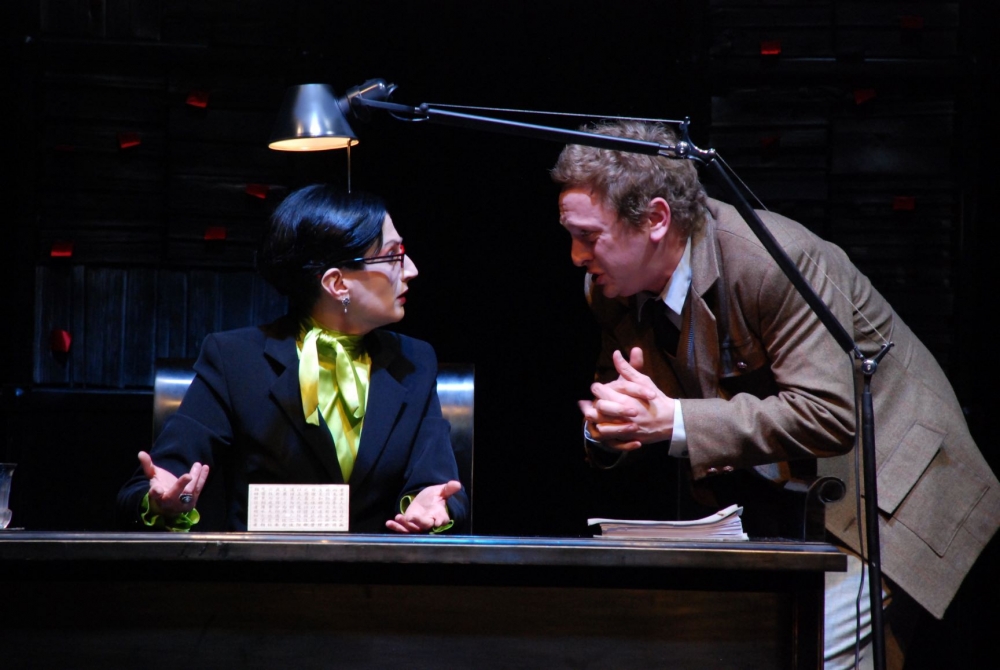 Lady with a dog

Real, big love is an excuse for everything, even for the destruction of life laws. The mistakes and weakness of human beings is a part of life and if not this contradictions, world would not have developed. What we are when we are in love? What does love mean basically in each of our lives? Love is what secures us from the uncertainty of the world. We must find it. And if we do, we must keep it. 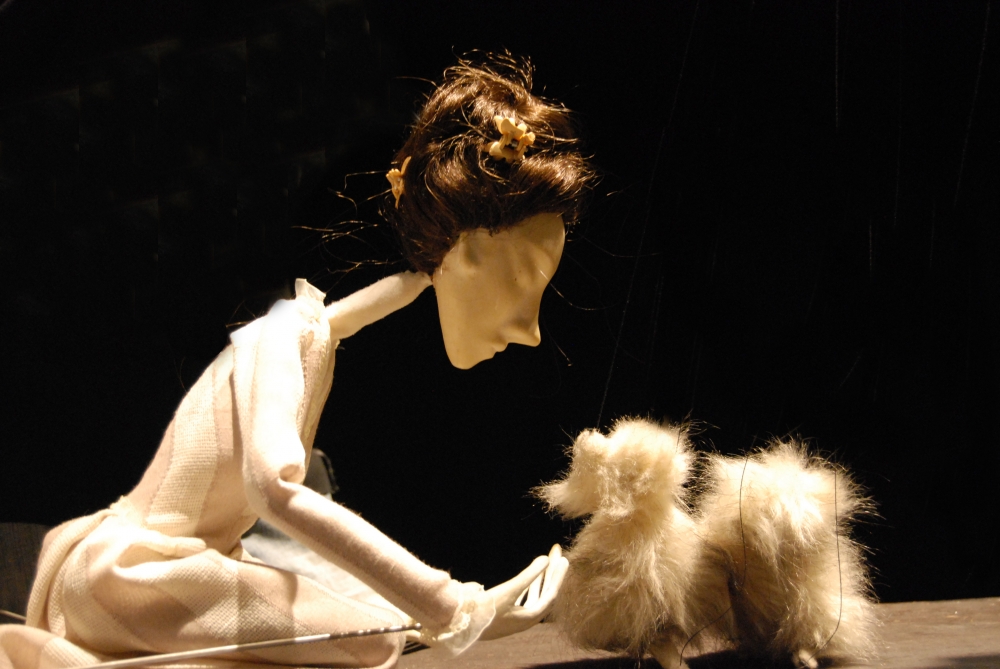 Shakespeare’ story of the enmity and love between two brothers. It’s a story about how life can suddenly change at a glance; a story full of lovers, animals, poetry and love flourishing deep within a forest. Some people believe that As You Like It is Shakespeare’s least Shakespearean play, while others argue that it is the source of everything he wrote afterwards, a prefiguring of the themes and stories that would dominate the rest of his career.

Here, you can see not only a prototype Hamlet, but also the melancholic heroes of A Midsummer Night’s Dream, as well as wise semi-divine creatures like Prospero. And it’s a play that has echoes of the mysteries of the medieval period, as well as the buffoonery performed in the city centers at the time, as well as its influences – and those it would influence. Like a mirror, one can see in the play the ghosts of Aristophanes, Dante and even Chekhov and Brecht. 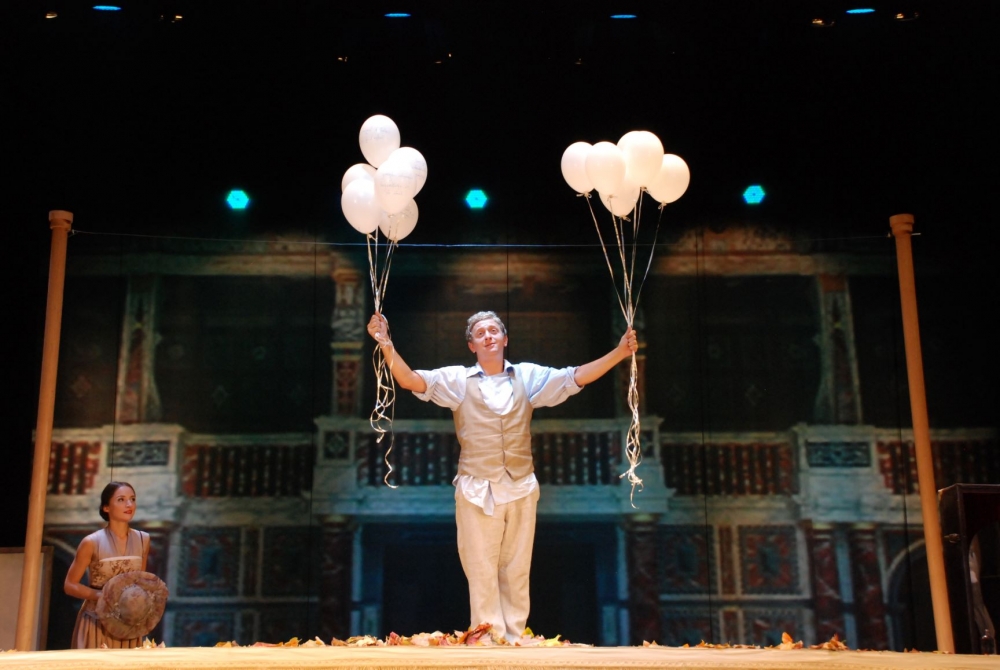 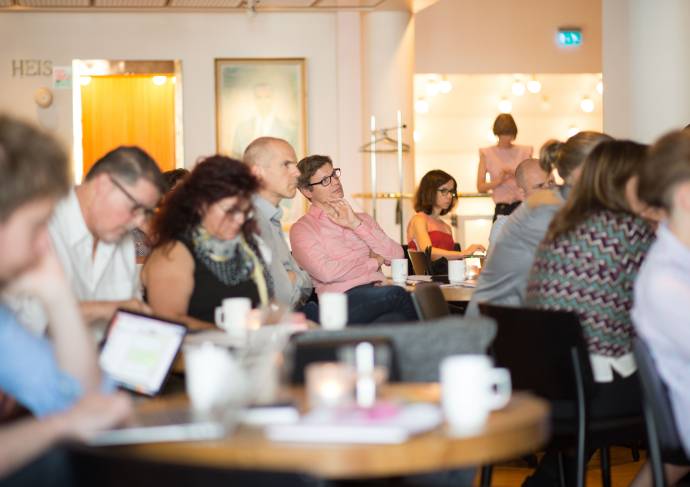 The next edition of the ETC International Theatre Conference will be a hybrid online / in person event, hosted by Schauspielhaus Graz. 10 - 12 June 2021